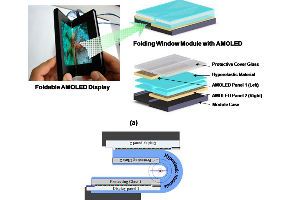 Highlights
Mobile phone manufacturers have unsuccessfully tried to make smaller devices with bigger screen displays. But the sheer impossibility of creating a seamless screen nixed the idea of a folding phone. Till now.

Researchers at Samsung Advanced Institute of Technology, South Korea, have built a prototype of a seamless foldable display that opens up to look like that of a regular smartphone.

The display consists of two active matrix organic light-emitting-diode (AMOLED) panels covered by a silicone window that prevents scratches and can serve as a touchscreen, the Daily Mail reports.

When folded down, they are separated by a gap of just one millimetre. But when the screen is opened, one panel lies almost completely on top of the other and appears seamless.

The researchers tested the foldable display's durability by performing 100,000 folding-unfolding cycles. They said the key to success was controlling the optical properties of the materials.

"All the materials in a foldable window unit (glasses and silicone rubber) must have almost the same optical properties and attach to each other strongly without any optical property change," Samsung's HongShik Shim said.

This new type of technology has not so far taken off because of the high manufacturing costs.

However, determined to compete with innovative design such as the iPad, a number of major manufacturers are determined to expand research and develop innovative new products with folding screens.

Samsung hopes that its large-screen devices will soon be available with AMOLED technology.