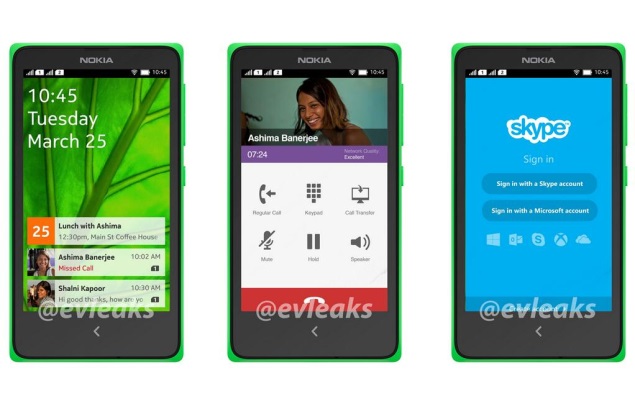 We have already heard about Nokia's rumoured Normandy budget phone, but now, new details of the yet-to-be-announced first Nokia Android device has been revealed in new leak.

Phone tipster, @evleaks after earlier claiming that reports suggesting that the Nokia Normandy will not see the light of day were incorrect, has now shared fresh leaked images of the device.

The leaked images purportedly reveal the alleged Nokia Normandy with a completely custom Android interface. The UI looks reminiscent of the software on Nokia's budget Asha line-up, though it's obviously Android underneath. Notably, an earlier report had suggested that Nokia, following the lead of Amazon, has been working on a fully-tailored or forked version of Android. Further, the report claimed that the alleged Nokia Normandy smartphone has been targeted at the low-cost segment as an Asha-equivalent smartphone, but with access to more traditional smartphone apps - a benefit that the report suggested had been missing in Nokia's dated Series 40-based Asha phones.

The tweet by @evleaks reads, " Android on Nokia ( -virtual buttons)" and includes the purported image of the device. The tweet hints that Nokia's forked Android version might not feature any on-screen navigation keys.

It is yet-to-be-seen if Nokia can release its rumoured Android phone ahead of the completion of the Microsoft deal. Especially considering that after signing the pact, Nokia can neither license the 'Nokia' brand for use in connection with mobile device sales nor use the brand on its own mobile devices for a specific period.

Prior to this, Nokia's alleged Normandy was leaked in a render showing the device in various colour variants.