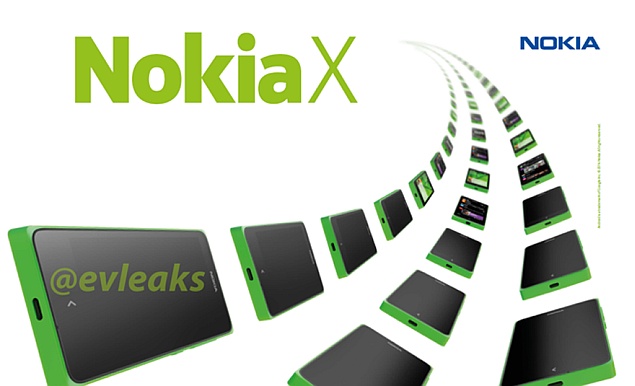 As the upcoming Mobile World Congress 2014 nears its scheduled time and date, a considerable number of leaks regarding Nokia's rumoured first-ever Android smartphone, Nokia X, have been doing the rounds. In the latest leak, it seems the press images of the alleged Nokia X smartphone have been revealed online, along with the news of its entering the Indian shores through the hands of developers.

The purported press images for the much anticipated Nokia X are courtesy popular tipster @evleaks, via a Twitter post. The post, with an image of a green-colour variant of the handset, seemingly confirms the name as Nokia X amidst a number of rumours crowding around the device since weeks.

The Nokia X, besides being said to fall between the Asha and Lumia line-up, is said to feature a 4-inch TFT display with a resolution of 480x854 (FWVGA) pixels; a 1GHz dual-core Snapdragon 200 processor; 5-megapixel rear camera; microSD card support and Android 4.4 KitKat. The device was recently spotted under a listing page on a Vietnamese online retailer website .

The Nokia X, according to a BGR report, is also said to have entered India but only as a seeding unit for developers. Rumours hint the device to be based on Android source code but without any Google services, which would also means the handset will not come with Google Play store access.

Nokia is also said to replace Google services with its Here Maps, Microsoft Bing, Outlook and Skype.The much-anticipated budget Nokia X smartphone is also said to come with its own app store dubbed as Asha on Linux, which reportedly already has the top 100 apps from the Google Play store.