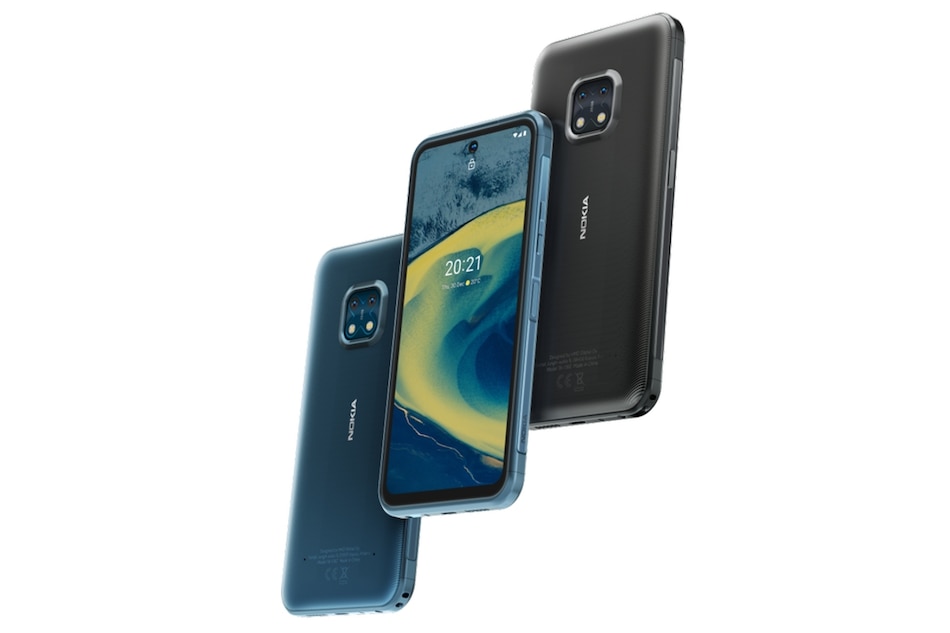 Nokia XR20 was unveiled on Tuesday as an all-new Nokia smartphone with a rugged build that is designed to withstand drops and can resist water. In addition to the Nokia XR20, Nokia brand licensee HMD Global brought the Nokia C30 entry-level smartphone with the largest screen and biggest battery in the Nokia C series. The Finnish company also launched the Nokia 6310 (2021) as a new member in its Originals feature phone series as well as introduced its new audio accessories that include the company's new truly wireless (TWS) earbuds, mono headset, and wired headphones.

Nokia XR20 price starts at EUR 499 (roughly Rs. 43,800) for the 4GB RAM + 64GB storage configuration. The phone also comes in a 6GB RAM + 128GB storage variant that is yet to receive an official price. On the colour options part, there are Granite and Ultra Blue shades to choose from.

All three new Nokia phones will be available for purchase in select markets starting Tuesday (July 27). The new models will also be coming to India, but details about their local pricing and availability are yet to be revealed.

The dual-SIM (Nano) Nokia XR20 runs on Android 11 with a stock experience and is promised to receive regular Android OS version upgrades for up to three years and monthly security updates for up to four years. The phone features a 6.67-inch full-HD+ (1,080x2,400 pixels) display with a 20:9 aspect ratio and Corning Gorilla Glass Victus protection. The display is also designed to work with wet hands and gloves. Under the hood, the smartphone has an octa-core Qualcomm Snapdragon 480 SoC, along with up to 6GB of RAM. There is a dual rear camera setup that houses a 48-megapixel primary sensor and a 13-megapixel ultra-wide shooter. Both camera sensors are equipped with ZEISS optics and include preloaded features such as SpeedWarp mode and Action Cam mode.

For selfies and video chats, the Nokia XR20 carries an 8-megapixel selfie camera sensor at the front.

The Nokia XR20 includes up to 128GB of onboard storage that supports expansion via microSD card (up to 512GB). Connectivity options include 5G, 4G LTE, Wi-Fi 6, Bluetooth v5.1, GPS/ A-GPS/ NavIC, NFC, USB Type-C, and a 3.5mm headphone jack. Sensors on board include an accelerometer, ambient light, barometer, gyroscope, magnetometer, and a proximity sensor. There is also a side-mounted fingerprint sensor. Further, the phone includes two speakers that are capable of producing up to 96dB sound, along with OZO Playback. There are also two microphones along with OZO Spatial Audio capture.

HMD Global claims that the Nokia XR20 can withstand up to 1.8-metre drops and one hour of under water, thanks to its MIL-STD810H-certified build. The phone also comes with an IP68 certification that highlights its dust- and water-resistant capabilities.

The Nokia XR20 packs a 4,630mAh non-removable battery that supports wired and wireless (Qi standard) charging. The battery is claimed to deliver up to two days of usage and has 18W wired and 15W wireless charging support. Besides, the phone measures 171.64x81.5x10.64mm and weighs 248 grams.

The dual-SIM (Nano) Nokia C30 runs on Android 11 (Go edition) and features a 6.82-inch HD+ display with a waterdrop-style notch. The phone is powered by an octa-core Unisoc SC9863A SoC, along with up to 3GB of RAM. It comes with a dual rear camera setup that houses a 13-megapixel primary sensor and a 2-megapixel depth sensor. The phone also carries a 5-megapixel selfie camera sensor at the front.

In terms of storage, the Nokia C30 has up to 64GB of onboard storage that is expandable via microSD card (up to 256GB). Connectivity options include 4G LTE, Wi-Fi 802.11 b/g/n, Bluetooth v4.2, GPS/ A-GPS, Micro-USB, and a 3.5mm headphone jack. Sensors on board include an accelerometer, ambient light, and a proximity sensor. There is also a rear-mounted fingerprint sensor.

The Nokia 6310 (2021) runs on S30+ and features a 2.8-inch QVGA display. It comes with preloaded the iconic Snake game and includes a built-in LED Torch. The phone is powered by a Unisoc 6531F SoC that is paired with 16MB RAM and 8MB onboard storage. There is also a 0.3-megapixel camera sensor at the back. Further, the phone has a Micro-USB port for charging and comes with wireless FM radio support. You'll also get Bluetooth v5.0 and Wi-Fi.