Nokia X71 aka Nokia 6.2 Specifications Leak Ahead of April 2 Launch, Spotted on Geekbench 4 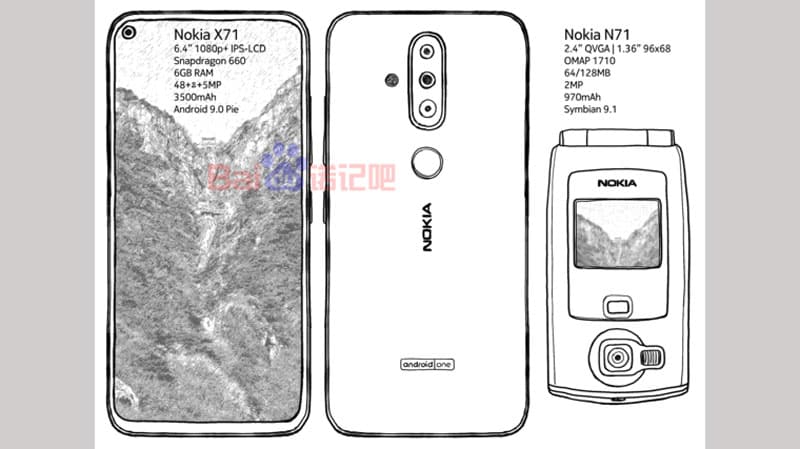 Nokia X71 aka Nokia 6.2 could be the first Nokia branded smartphone with a hole-punch display

Nokia X71, the upcoming smartphone from HMD Global, will be launched in Taiwan on April. As you may know, HMD Global has been manufacturing phones under the Nokia brand for a while now. One such smartphone, with its name already confirmed, is the Nokia X71. Now we have already seen a lot of leaks about this smartphone and have a fair idea of what it will have on offer. Previous leaks tipped that when launched internationally, the Nokia X71 would either take the Nokia 6.2 name or the Nokia 8.1 Plus name.

A leaked trademark hand-sketched image of the Nokia X71 has appeared which reveals what the smartphone will look like. What is interesting is that HMD Global seems to have switched from the display notch to the hole-punch design for the X71. As a result, we don't see a notch that common on Nokia branded smartphone but a hole-punch on the left corner of the screen. The same claims that the smartphone won't be called the Nokia 6.2 when it launches globally.

According to the leak accompanying the hand-drawn image, the display of the Nokia X71 will measure 6.4-inches and is an LCD panel with full-HD+ resolution. HMD Global has allegeldy picked the Qualcomm Snapdragon 660 SoC to power the X71 and paired it with 6GB of RAM. We recently spotted it on Geekbench 4 where it confirms these processor and RAM details. On Geekbench 4 the phone managed to clock 1458 in single-core tests and 5454 in multi-core tests.

The Geekbench 4 listing shows that the device will be running on Android 9 Pie. This isn't surprising since most Nokia branded smartphones are a part of Google's Android One programme.

The Nokia X71 as part of the current leaks is also rumoured to have a triple camera setup at the back and the sketch reveals that it could be a 48-megapixel primary sensor along with a 2-megapixel secondary camera and a third 5-megapixel sensor. Details with respect to sensors aren't known at the moment. A 3,500mAh battery was also tipped.

As we mentioned, previous leaks spotted by NokiaPowerUser hint that the Nokia X71 could be codenamed as TAS which stands for Taishun. Screenshots from FIH OTA tracker of the Nokia X71 and Nokia 6 (2019) that appeared on China's Baidu reveal that both have the same codename and could be the same device.