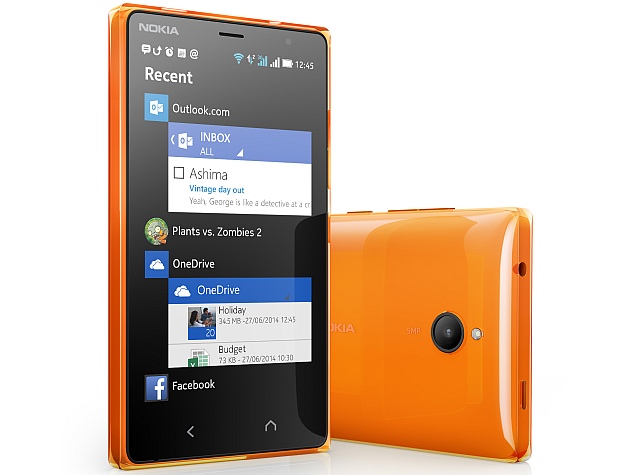 Microsoft has launched the Nokia X2 Dual SIM in India, priced at Rs. 8,699. The smartphone was first unveiled globally in June, with immediate availability for 'select' countries - which were never announced.

The new Nokia X2 is a dual-SIM smartphone and does not has a single SIM variant. The new Nokia X series phone will be available in Glossy Black, Green, Orange, Dark Grey, White and Yellow. The Nokia X2 now sports a translucent outer layer, reminiscent to the ones seen on Nokia's Asha range of handsets.

Microsoft Mobile reiterates that the all new Nokia X2 can run Android apps and comes preloaded with the latest version of Nokia Store that now incorporates third-party app stores.

Microsoft says, "The Nokia X2 is also equipped with another navigation option; the brand-new 'apps list', which keeps your home screen clear for your most used apps, bringing Nokia X2 in line with the existing Lumia experience."

One of the prominent additions in the design of the Nokia X2 is the new home button that takes you back to the start screen and is accompanied by the back button that allows flipping through most recent actions, and long pressing shows what apps are open.

The new Nokia X family member features a 4.3-inch ClearBlack LCD display with WVGA resolution (480x800 pixels) that offers a pixel density of 217ppi. It is powered by a dual-core Qualcomm Snapdragon 200 processor clocked at 1.2GHz clubbed with 1GB of RAM. Notably, last generation's Nokia X+ and Nokia XL had just 768MB of RAM, while the Nokia X had 512MB of RAM. All three last generation Nokia X phones ran on a dual-core Qualcomm MSM8225 Snapdragon S4 chipset, and can therefore can be considered an upgrade.

The Nokia X2 sports a 5-megapixel autofocus rear camera with LED flash, while there a front-facing camera (unspecified resolution) also onboard. The smartphone is backed by an 1800mAh battery that's rated to deliver up to 10 hours of 2G talk time and up to 86 hours of continuous music playback. The Nokia X2 features 4GB of built-in storage, which is expandable via microSD card (32GB).