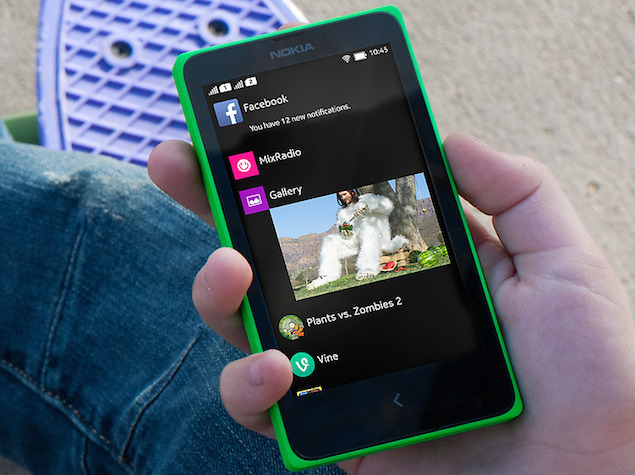 Nokia's first Android smartphone, the Nokia X, is now listed at an online retailer in India, with a price of Rs. 8,500. The retailer claims the Nokia X smartphone will be available from 15 March 2014.

The Finnish manufacturer had soon after its MWC 2014 event, listed the Nokia X, Nokia X+ and Nokia XL dual-SIM variants on its India site, without pricing or availability details. At the MWC 2014 launch, the company had said the Nokia X would go on sale 'immediately' in Africa, Asia-Pacific, Europe, India, Latin America, and the Middle East.

The Nokia X has been listed on the Mobile Store and was first spotted by Maktech blog. The Nokia X is available in its Black, Green, Cyan, Yellow, Red, and White colour variants. Of course since this is a third-party store, one cannot be certain if this will be the official launch price, whenever the phone is unveiled in India.

The Nokia X is based on the Android Open Source Project (AOSP), and is powered by Microsoft and Nokia services. The highlight of the Nokia X is the highly customised version of Android, with the Metro-inspired UI and access to Nokia's own app store. While there's no access to Google's Play Store, users can side-load Android apps from any third-party source. Nokia has used the AOSP version corresponding to Android 4.1 Jelly Bean as the baseline for its operating system. 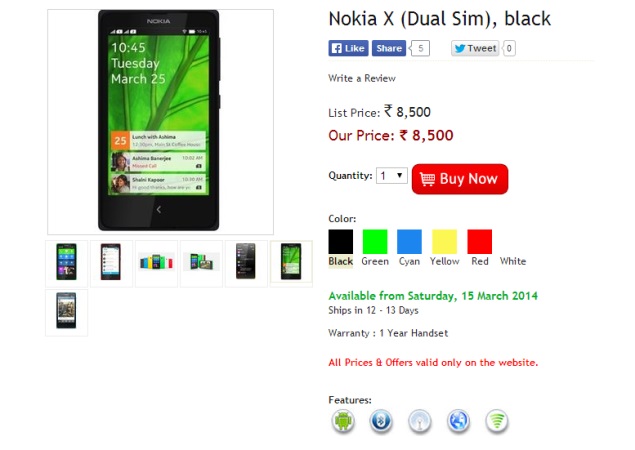 The Nokia X is powered by 1GHz dual-core Qualcomm Snapdragon S4 processor, alongside 512MB of RAM. It sports a 3-megapixel rear camera. The Nokia X handset comes with 4GB of in-built storage, and can be expanded up to 32GB via microSD card.

The Nokia X supports Bluetooth, Wi-Fi, GPS, AGPS, EDGE, GPRS and 3G connectivity options. It is backed by a 1500mAh battery, which can deliver up to 13 hours of talktime and up to 672 hours of standby time on 2G network.