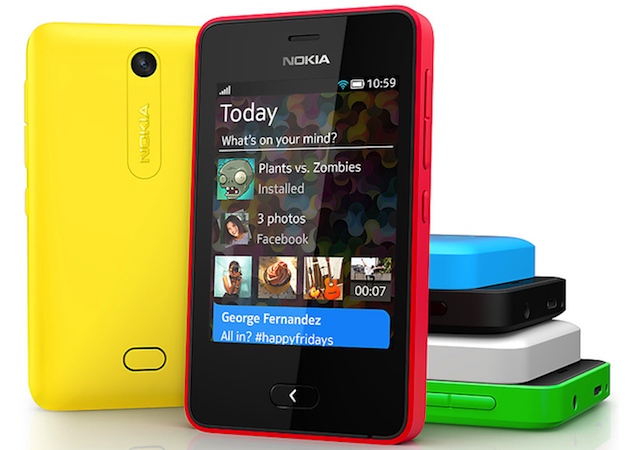 Nokia has unveiled Asha 501, the first phone from a new family of Asha phones that will run a revamped operating system that Nokia is calling the Asha platform.

The Asha 501 will feature a 3.2-megapixel camera, Wi-Fi connectivity and will offer a 4GB memory card in the box. The phone supports microSD cards of up to 32GB. The phone does not offer 3G connectivity.

While the exact capacity of the phone's battery is not known, Nokia claims that the phone will offer standby time of up to 48 days with single SIM and 26 days with dual-SIM. The phone weighs 98 grams.

"The new Nokia Asha 501 raises the bar for what is possible in affordable smartphone design and optimization," said Timo Toikkanen, executive vice president, Mobile Phones, Nokia. "The synergy between the physical design and the engine that is the new Asha platform has created a smartphone with both style and substance at a great price."

The Nokia Asha 501 is expected to start shipping in June 2013 at a suggested pricing of $99 before taxes and subsidies. It is expected to be available through approximately 60 operators and distributors in more than 90 countries worldwide.

The Asha 501 is the first smartphone built on the new Asha platform, which leverages Nokia's investments in Smarterphone, a company which Nokia acquired in 2012 and builds on S40/ Series40, Nokia's feature phone platform.

Nokia claims that the new Asha software platform provides developers with an open standards-based environment for creating quality apps for consumers. Developers will be create apps for the Nokia Asha 501 that will be compatible with future Asha platform-based devices. Nokia has also introduced tools like Nokia In-App Payment and Nokia Advertising Exchange (NAX), in addition to its operator billing network to offer monetization options to app developers.

Nokia says that many of the most popular applications are already available or in development for the Nokia Asha platform, including apps from CNN, eBuddy, ESPN, Facebook, Foursquare, Line, LinkedIn, Nimbuzz, Pictelligent, The Weather Channel, Twitter, WeChat, World of Red Bull and games from Electronic Arts, Gameloft, Indiagames, Namco-Bandai and Reliance Games. WhatsApp and other key partners will also offer apps for the new Asha.

The HERE experience, based on Nokia's location platform, will also be available as a download for the Nokia Asha 501, starting in Q3 2013 and will initially include basic mapping services.