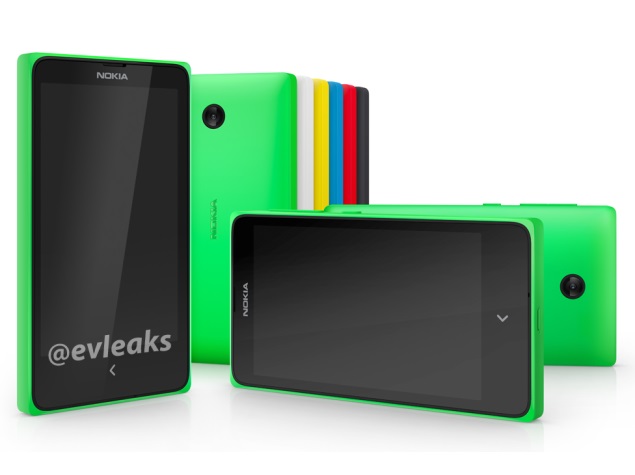 Nokia may not have officially revealed plans for making Android devices, but rumours about the company's first Android-powered smartphone, thought to be codenamed Normandy, are buzzing again.

@evleaks has posted a render showing Nokia's alleged first Android smartphone, Normandy in various colour variants. The tweet reads, "Nokia Normandy, 2013" and includes the purported render of the device. The tweet also indicates that Nokia might launch the alleged Normandy by end of this year.

The Nokia Normandy's leaked render shows the yet-to-announced device sporting a similar design to the Asha touch range of phones. There is a physical back button on the front panel of the alleged Normandy, as seen in leaked render. The rear panel is seen with the camera accompanied by the Nokia logo branding in the middle. The rumoured Nokia Normandy can be expected to come in Black, Cyan, Mint Green, Red, Yellow and White colours, if the leaked render is believed.

If the rumours turn out to be true, Nokia, which has been supporting the Windows Phone platform like a lone ranger, might be finally changing gears and entering Android segment with its first device.

Earlier, a report had claimed that the Finnish handset maker might launch the Normandy in 2014 and described the Nokia Normandy efforts as 'full steam ahead'. The report also revealed that Nokia, following the lead of Amazon, has been working on a fully-tailored or forked version of Android, like the software on the online retail giant's Kindle Fire tablet range.

Further, the alleged Nokia Normandy has been said to be targeted at the low-cost segment as an Asha-equivalent smartphone, but with access to more traditional smartphone apps - a benefit that the report suggested has been missing in Nokia's dated Series 40-based Asha phones.

As of now, there is no clarity whether the alleged Nokia Normandy Android phone is real or just a rumour. However, contradicting the rumours about a Nokia Android phone, Stephen Elop, the former CEO of Nokia had said in July that the company made the right decision by choosing Windows Phone over Android.