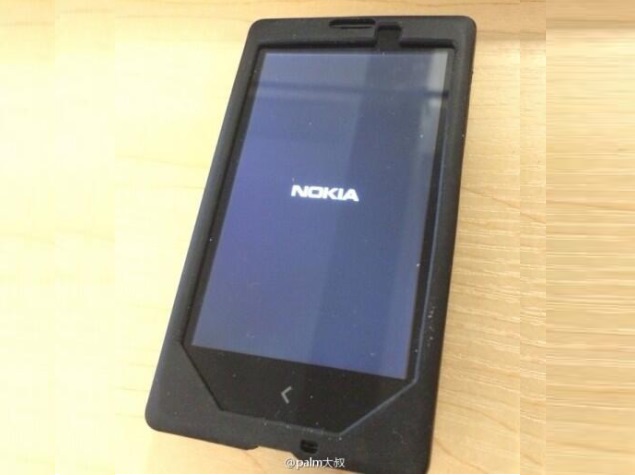 While Nokia still hasn't revealed plans for its rumoured Normandy budget Android phone, a new leaked live image now points to the existence of such a device.

Further the leaked image purportedly reveals the back button below the display that appears to be a capacitive touch button, similar to what usually seen on Nokia's Lumia smartphones. Unfortunately, the leaked image shows the alleged Normandy in a casing which covers most of the rest of the design elements of the device. It's worth pointing out that this is the first time a live image purportedly shows the alleged Normandy Android phone, and we have in the past seen a number of supposed renders of the rumoured device.

Earlier this month, the rumoured Nokia Normandy was leaked in image which purportedly revealed a completely custom Android interface running on top of the device. The UI looked reminiscent of the software on Nokia's budget Asha line-up, though it was obviously Android underneath.

Notably, an earlier report had suggested that Nokia, following the lead of Amazon, has been working on a fully-tailored or forked version of Android. Further, the report claimed that the alleged Nokia Normandy smartphone has been targeted at the low-cost segment as an Asha-equivalent smartphone, but with access to more traditional smartphone apps - a benefit that the report suggested had been missing in Nokia's dated Series 40-based Asha phones.

It is still to be seen if Nokia can release its rumoured Android phone ahead of the completion of the Microsoft deal.

ISRO turns to YouTube after user engagement success with Facebook
3D printing all set to break out of niche, hit mainstream