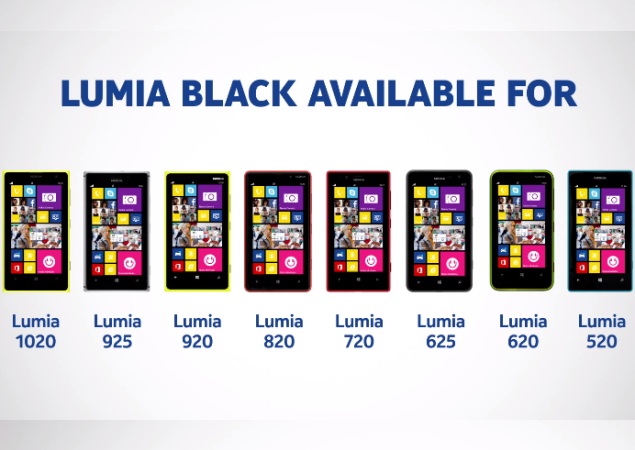 Further, the software page of Nokia claims that the update is currently available in Africa, Asia Pacific, Europe, Latin America, Middle East and North America, with other regions to follow soon. The Nokia Lumia 1020 and Nokia Lumia 925 will be the first Lumia devices to receive the update, while other models will be receiving the update in the coming weeks.

The latest Lumia Black update introduces new features like App Folder, which allows users to group similar apps into a folder (a tile) on the Start screen; an updated Nokia Glance screen 2.0 will allow users to keep notifications for phone, messages, email, outlook, and calendar alongside any apps such as Twitter, Facebook, and WhatsApp; Nokia Refocus which comes with Lytro-like features that automatically changes the focal point on an image, once it has been processed on the Lumia device, and Nokia Beamer, which allows sharing images, documents, and presentations to any HTML5-enabled display. The blog post notes that both Nokia Beamer and Nokia Refocus features are coming to all the Lumia device with 1GB of RAM or upwards.

In addition, the update also includes the Nokia Camera app which combines two popular apps, the Nokia Pro Cam and Nokia Smart Cam into one app. The new Nokia Camera app brings new editing and sharing features to the Windows Phone 8 Lumia devices. The Nokia Camera app includes new camera algorithms and comes with a new feature dubbed colour pop. It also sports a smart mode which can shoot a number of images in a moment and allows removing unnecessary objects form the images.

At Nokia World, the Finnish giant announced that the company was working on a firmware update dubbed Lumia Black which would be built on Microsoft's third Windows Phone update and that it would bring the above newly revealed software features to its existing Window Phone 8 smartphones. The Lumia 1520 and Lumia 1320 are currently the only devices to feature the new firmware.

Google+ users can now email any Gmail address, and vice-versa
Snowden not worthy of being called "hero whistleblower": FBI director