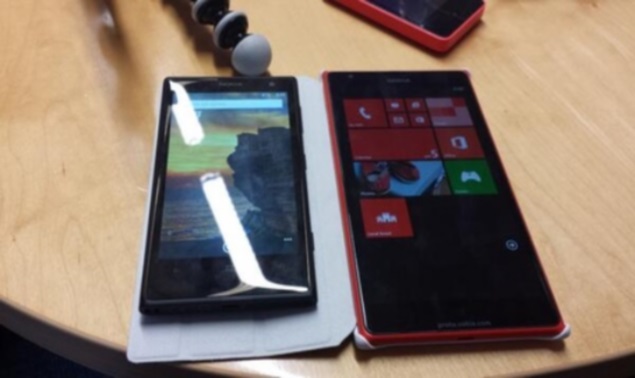 Nokia might not have confirmed anything about its rumoured Nokia Lumia 1520 big screen smartphone, code-named Bandit, but that doesn't stop rumours surrounding it from surfacing online.

The first image of the alleged phablet from the Finnish handset maker emerged on The Verge forum posted by one of the members. The image reveals the yet to be announced Nokia Lumia 1520 pictured alongside the company's flagship smartphone, the Nokia Lumia 1020.

The leaked image does not reveal a lot of details related to the alleged Nokia Lumia 1520 phone except indicating its expected size. The image shows the two devices, the Lumia 1020 and the alleged Lumia 1520 kept side-by-side with the display of the both the devices switched on.

In the image, the alleged device seems much larger compared against the Nokia Lumia 1020 that features a 4.5-inch display. The Nokia Lumia 1520 will reportedly feature the biggest display on a Lumia device launched till now.

However, The Verge notes that it was unable to fully confirm if the image was accurate. Earlier, @evleaks claimed that Nokia's alleged Bandit phablet will be dubbed as the Nokia Lumia 1520.

Previously, it was reported that Nokia was currently testing a 6-inch device running an updated version of the Windows Phone 8 OS. The device was said to be code-named 'Bandit' and expected to include a full-HD (1080p) display and a Qualcomm Snapdragon quad-core processor.

It also suggested that the alleged Nokia phablet would ship with a 20-megapixel rear camera and may borrow the rear panel features of the Nokia Lumia 925 to accommodate the camera. However, the device may not be unveiled before Microsoft rolls out the GDR3 update to existing Windows Phone devices. Microsoft is reportedly testing the GDR3 software update for Windows Phone 8.