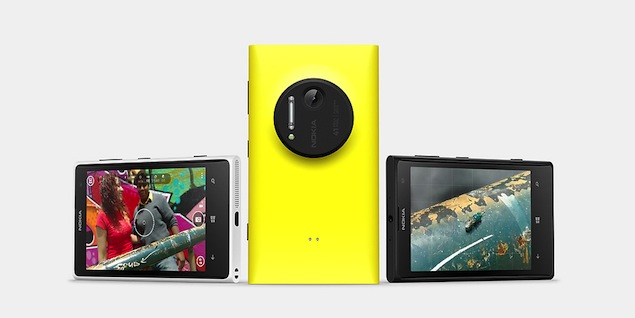 Nokia has launched its new flagship smartphone, the Nokia Lumia 1020, in India. The Lumia 1020 will be available with retailers across the country starting October 11, and Nokia will only be revealing the cameraphone's price a day before that, on October 10.

The Finnish handset maker had unveiled the phone at an event in New York, in July. The Nokia Lumia 1020 comes equipped with a 4.5-inch display which is almost the same size as the one on the Lumia 920 and Lumia 925.

The Lumia 1020's display boasts of a pixel density of 332 PPI. The Nokia Lumia 1020 is powered by a 1.5GHz dual-core Snapdragon processor with 2GB of RAM and runs Windows Phone 8.

The USP of the phone is its 41-megapixel PureView camera sensor which offers Optical Image Stabilization (OIS), backside-illuminated image sensor, 6 lens optics along with a Xenon Flash. Nokia has also added some camera software including the Nokia Pro Camera app and Smart Camera Mode. It also offers a 1.2-megapixel front facing camera. The phone comes with 32GB internal storage which is non-expandable.

Commenting on the launch, P. Balaji, Managing Director, Nokia India said, "The response to the Nokia Lumia range in India has been extremely encouraging."

So far, Nokia's high-end range of Lumia smartphones have not been a major hit in the Indian market, and though the more affordable models have been doing well, the company is still struggling to get back its share in the smartphone segment.

The Lumia 1020 is not the first PureView phone from Nokia. The company had launched the 808 PureView phone last year, that featured a 41-megapixel snapper and created a lot of buzz. Next in the list was Lumia 920 with PureView technology that focused on low-light imaging.