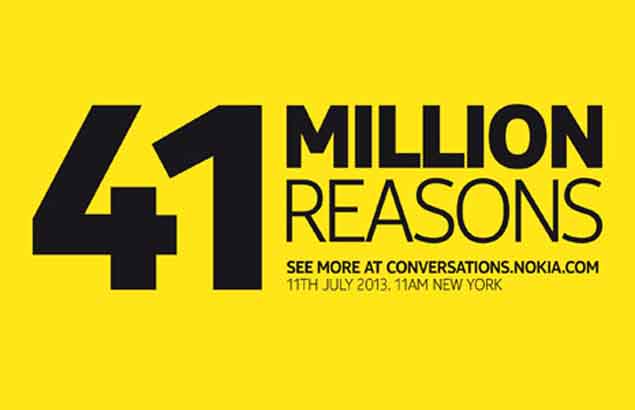 Nokia is holding a press event on July 11, 2013 in New York City to announce a new smartphone. The company has already sent out invites titled "Zoom reinvented". Most rumours suggests that the company will be unveiling its 41-megapixel monster smartphone running on Windows Phone 8. This smartphone has been leaked extensively over the past couple of months and carries the codename 'EOS'.

Now Nokia seems to be adding fire to all the speculations through a new post in its Conversations blog that is titled "41 million reasons to zoom in". The Finnish smartphone maker has also shared a similar status on Twitter as well. The mention of "41" in the teasers, seems to be a hint that Nokia is indeed launching the much awaited EOS smartphone on July 11. Furthermore, this headline also hints that the Nokia EOS would indeed come with a 41-megapixel camera sensor just like 808 PureView smartphone.

Earlier rumours have suggested that Nokia EOS will pack in OLED display, which has a screen resolution of 768X1280 pixels. The smartphone is also expected to have 32GB of internal storage.

Some purported images indicate that the Nokia EOS will come with a dedicated camera button that will be situated on the right panel. There have also been news reports suggesting that Nokia EOS will feature a new "Nokia Pro Camera" app that has a refreshed interface. This app will be in addition to the regular camera app. The refreshed camera interface will also offer manual focus option.