Nokia G20 is backed by a 5,050mAh battery and the company says it can last up to three days on a single charge. 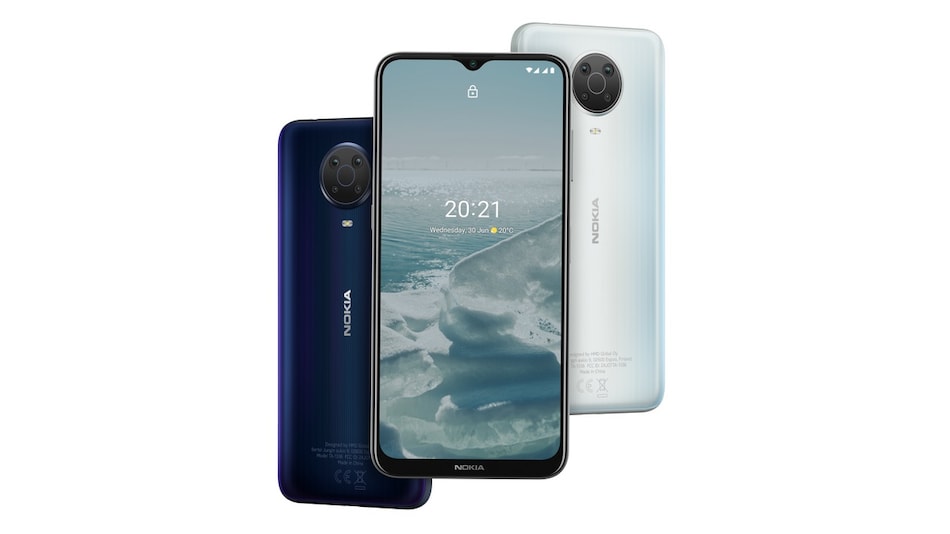 Nokia G20 has a notch for the selfie camera

Nokia G20 has launched in India as the latest budget friendly offering from brand licensee HMD Global. The phone is offered in two colours and a single RAM and storage configuration. Nokia G20 sports a quad rear camera setup and a notch for the selfie camera. The phone comes with a pattern on the back and is powered by an octa-core SoC. The company says it can last up to three days on a single charge. The launch comes shortly after it was spotted on a banner ad on Amazon India, announcing the upcoming pre-orders.

Nokia G20 is priced at Rs. 12,999 for the sole 4GB RAM + 64GB storage variant. It is offered in Glacier and Night colour options. The phone will be available for purchase via Nokia India website and Amazon India starting July 15. Pre-booking will start on Amazon and Nokia website from July 7 at 12pm (noon). As mentioned, prior to HMD Global's launch press statement, the Nokia G20 was spotted on Amazon India, in a banner ad detailing the pre-order date.

The dual-SIM (Nano) Nokia G20 runs Android 11 with two years of updates promised by the company. It features a 6.5-inch HD+ display with 20:9 aspect ratio and a notch for the selfie camera. Under the hood, the Nokia G20 is powered by the octa-core MediaTek Helio G35 SoC with 4GB of RAM and 64GB of internal storage. The storage is expandable via microSD card (up to 512GB).

Connectivity options on the Nokia G20 include Wi-Fi, 4G, Bluetooth v5, GPS, NFC, 3.5mmm headphone jack, and a USB Type-C port for charging. Sensors onboard include ambient light sensor, proximity sensor, accelerometer (g-sensor), and gyroscope. There is a side-mounted fingerprint scanner as well. Nokia G20 is backed by a 5,050mAh battery with support for 10W charging. In terms of dimensions, the phone measures 164.9x76.0x9.2mm and weighs 197 grams. It has an IPX2 build and a dedicated Google Assistant button on the side.