Nokia G20 could be backed by a 5,000mAh battery and the company has said the phone can last up to three days on a single charge. 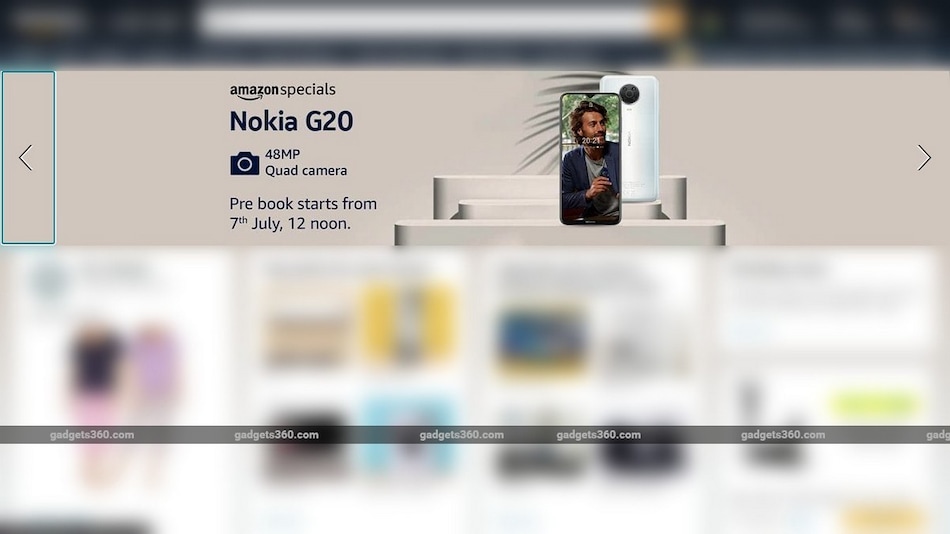 Nokia G20 will be offered in two colours

Nokia G20 will be available for pre-booking in India from July 7, its Amazon listing has revealed. The price for the phone was also seemingly revealed through the banner on the e-commerce website, but it has since been edited to exclude the price. The phone will be a budget-friendly offering that packs a quad rear camera setup. There's a pattern on the back and the phone will be offered in two colour options. The phone will come with a notched display and is claimed to feature a long-lasting battery.

Nokia G20 is said to start at Rs. 12,999, but its RAM + storage configuration has not been shared. It seems Amazon has edited this banner (as seen in the main image) to remove the price and keep the pre-booking date — July 7 at 12pm (noon). Back in April, a 4GB RAM + 64GB storage variant of the Nokia G20 was tipped, which will likely be the configuration of its base model expected to be priced at Rs. 12,999.

The banner with the price was spotted by NokiaMob. Gadgets 360 has reached out to Nokia brand-licensee HMD Global to get clarification on the pricing.

The dedicated microsite on Amazon shows some of the specifications of the Nokia G20. The phone will run Android 11 out of the box and receive two years of OS updates as well as three years of monthly security updates. It features a 6.5-inch notched display and be offered in two colours: Glacier and Night. The phone carries a quad rear camera setup that is headlined by a 48-megapixel primary sensor. The company claims the phone can last up to three days on a single charge. The Nokia G20 will also feature a side-mounted fingerprint scanner. A USB Type-C port can be seen on the bottom as well.

Some specifications of the Nokia G20 were allegedly leaked via a Geekbench listing. The phone is tipped to be powered by a MediaTek Helio P35 SoC, paired with 4GB of RAM and Android 11. In terms of camera details, it may come with a 2-megapixel depth camera, a 5-megapixel ultra-wide sensor, and a 2-megapixel macro sensor, alongside the now confirmed 48-megapixel primary sensor. At the front, there may be an 8-megapixel selfie shooter. Nokia G20 is said to be backed by a 5,000mAh battery with support for 10W charging.