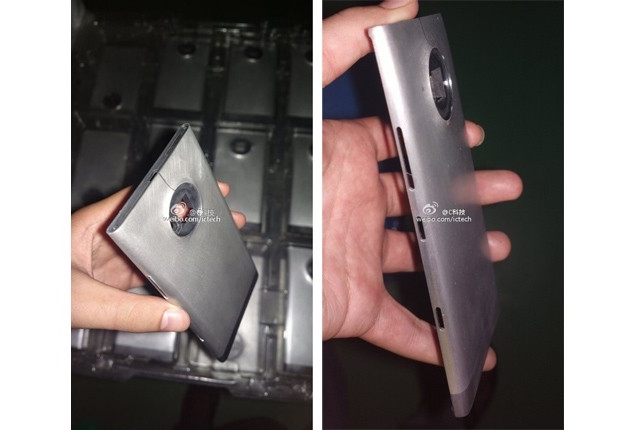 Nokia seems to be having a difficult time keeping its forthcoming EOS smartphone away from the spy cameras. The smartphone has already been extensively leaked over the past couple of months.

Now a new set of photographs of this smartphone have been posted online. The Chinese website Sina Weibo has posted alleged pictures of Nokia EOS. In these pictures Nokia EOS has been captured sporting a metal-clad body.

From these images, it appears that the right panel of the Nokia EOS houses the volume rocker, the screen lock/ power off key along with the dedicated camera button. The back panel of this forthcoming smartphone is also on display in these alleged shots.

In addition to this, earlier rumours have indicated that Nokia EOS will pack in OLED display, which has a screen resolution of 768X1280 pixels and 32GB of internal storage.

There have also been news reports suggesting that Nokia EOS will feature a new "Nokia Pro Camera" app that has a refreshed interface. This app will be in addition to the regular camera app. The refreshed camera interface will also offer manual focus option.

Nokia is holding an event in New York on July 11 and it is expected that the Finnish smartphone-maker will be unveiling the EOS at this event. The invites for this event have already been sent out. It is also being said that the second largest telecom operator in US, AT&T, is already testing the device.