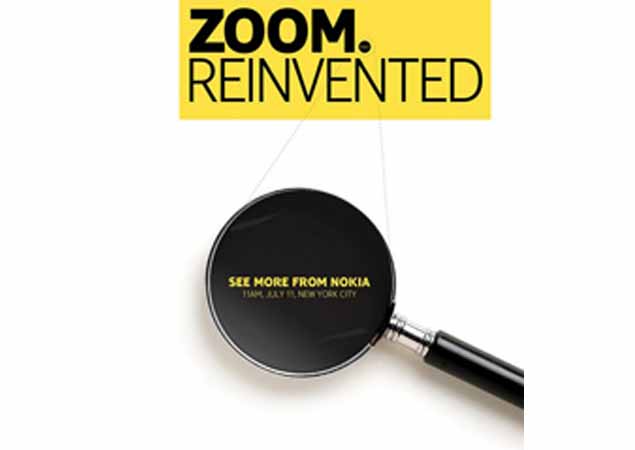 Nokia has sent out invites for an event on July 11 in New York. From the invite it appears that the company will announces its much awaited camera-focussed smartphone at this event.

The invite features a big magnifying glass along with the words "zoom reinvented". Apart from this, the invites gives no hint of what the company may unveil at this event.

The Nokia EOS smartphone has been leaked extensively over the last one month. Going by some of the leaked images, the Nokia EOS may follow the same design philosophy as the Nokia Lumia 920 and come with body made of polycarbonate materials. Apart from this, Nokia is rumoured to have OLED display, which has a screen resolution of 768X1280 pixels and 32GB of internal storage.

There have also been news reports that indicate Nokia EOS will feature a new "Nokia Pro Camera" app that has a refreshed interface. This app will be in addition to the regular camera app. The refreshed camera interface will also offer manual focus option. It is also being said that the second largest telecom operator in US, AT&T is already testing the device.

Nokia enthusiasts have been waiting for this smartphone ever since the company launched its PureView 808 smartphone in February 2012.

BlackBerry releases BlackBerry 10.2 beta for developers with Android 4.2 runtime
Next generation iPhone will have a Gold colour variant: Report