Nokia CEO running out of time to turn company around 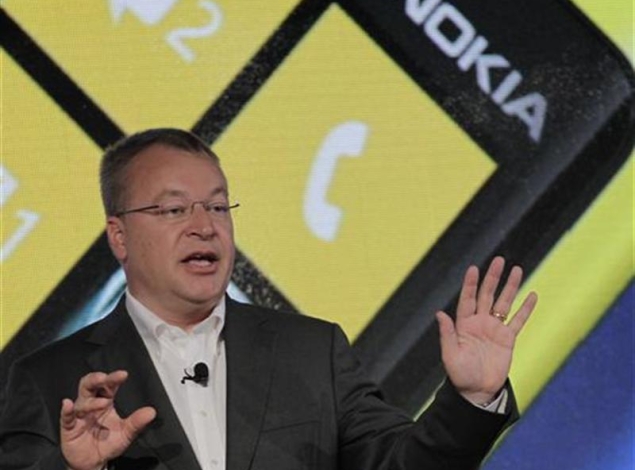 Stephen Elop only has a few months to show he can turn Nokia around if he is to survive but the new smartphone is unlikely to woo customers back from Apple and Samsung.

Investors and analysts say the chief executive has until early 2013 to prove he made the right choice by partnering with Microsoft Windows or his future at the loss-making company will be called into question.

Nokia still sells almost a million phones a day but analysts are pessimistic on the outlook, predicting Lumia 920 will lose out to Apple's iPhone 5 at the top end of the smartphone market in the 2012 holiday season.

"Elop has not been able to attract customers and that is what counts. You can say that he has not had enough time, but he has been there for two years. Time is up," said Magnus Rehle, senior partner in Greenwich Consulting, which advises large telecoms companies.

Elop promised to wow with new models, but the Lumia 920 turned out to be an upgrade of a previous model, and Nokia shares fell sharply during the launch event, losing a quarter of their value in two sessions.

They have since recovered to trade at 2.20 euros, helped by the global stock market recovery but are sill below the pre launch level.

A strong holiday season could help Elop survive but investors and analysts doubt this will happen.

"The Christmas season is a lost cause . For Nokia, if there is any chance, it will be Spring," said Juha Varis, who holds Nokia shares as part of the Danske Invest Finnish Equity Fund.

"The beginning of next year may be the final judgement. I think that maybe the end of the first quarter is the marking point."

Brave
Nokia was already having a difficult time when the Canadian took control of the former market leader in September 2010.

Its share of the smartphone segment had dropped to 33 percent from 39 percent two years earlier and some analysts say a bold approach was needed.

Elop shocked investors by dumping the company's own Symbian software and betting on unproven software from his former employer Microsoft in February 2011. He promised a two-year transition and a longer term operating profit margin of at least 10 percent.

"He has been making some brave decisions and courage is something this company has lacked for a long time before Elop joined," said Nordea analyst Sami Sarkamies.

"His starting point was really weak and it's hard to say someone else would have done a better job."

But he also said Elop has until the end of the first or second quarter of 2013 to show his strategy can work.

So far he has been unable to halt the decline. The share of the smartphone market had fallen to 6 percent in the second quarter of this year, according to research firm Canalys.

Nokia has reported operating losses of 3 billion euros in the last 18 months, closed sites around the world including the Finnish factory in Salo that was the hub of its 1990s success, cut tens of thousands of jobs and revamped top management.

Investors who held on to their shares have seen the value of their holdings shrinking by more than 70 percent since the Microsoft strategy was unveiled.

Battle with Apple
Nokia was caught using a video and photos shot with professional cameras to advertise the capabilities of the new Lumia 920 model, highlighting the contrast with Apple's slick launch of the new iPhone 5.

Elop needs strong sales this holiday season to prove his strategy has worked but analysts expect shoppers to opt for the sleeker iPhone or Samsung Galaxy range.

Apple reached more than 2 million orders for the new iPhone 5 during the first 24 hours, with demand exceeding supply. Nokia is expected to sell less than 4 million of its Windows Phones in total this quarter while Samsung has sold 20 million Galaxy S3 phones in three months.

"It will certainly be an iPhone Christmas," said Gartner analyst Carolina Milanesi.

Some shareholders are holding out for a long-term recovery by the company, which has a history of reinventing itself. It faced bankruptcy in the 1990s before it shifted to cellphones from toilet paper and rubber boots.

Nokia still sold 6 million smartphones using its old Symbian software in the quarter to end-June, more than the 4 million sales in Windows phones, even though it has launched only one Symbian handset in the last 12 months.

Nokia's current share price also offers opportunity for anyone believing Microsoft could become the third force, alongside Apple and Google, on the smartphone market.

Microsoft will roll out Windows Phone like tile based start screens also to all PCs and tablets with Windows 8 launch a move which could make different-looking mobile platform more accessible to consumers over coming years.

Android solution
But this might be too late for Elop and his strategy.

Financial analysts expect Nokia's troubles to continue. Average market expectations are for a 0.02 euro loss per share, but Thomson Reuters StarMine, which gives more weight to estimates from the most historically accurate analysts, is expecting Nokia to post a 2013 loss of 0.06 euro per share.

Although still more than 1 euro per share, Nokia's cash reserves of 4.2 billion euros are set to dwindle and all major ratings agencies have cut their rating on Nokia debt to junk

For those shareholders holding out for a longer-term improvement at Nokia, several analysts suggest a switch in strategy towards the cheaper end of the smartphone market.

Android models cost under $100 while the cheapest Windows Phone costs around $200.

Danske's Varis also said this could be a wise tactic for Nokia but focussing on Android instead would mean admitting defeat for Elop's Microsoft strategy.

"He's totally a Microsoft guy, so it is natural that he would have to step down then," he said.