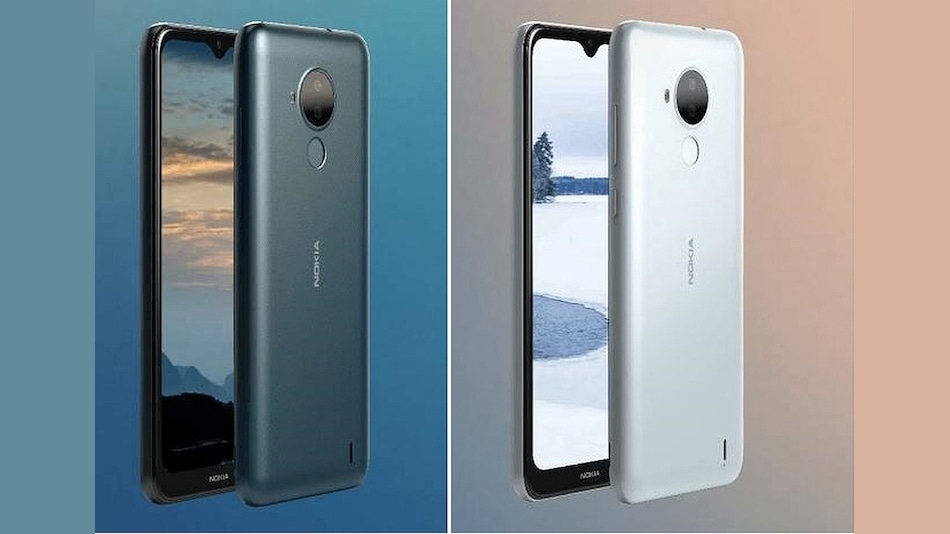 Nokia C30 specifications, design, and colour options have purportedly leaked ahead of its launch. The leaked renders show the front and the back design of the upcoming smartphone in two colours. A Russian retailer listing has also tipped the specifications of the Nokia C30. The smartphone was also recently spotted on the US Federal Communications Commission (FCC), hinting that the launch of the smartphone is imminent. However, Nokia licensee HMD Global has not shared any information about the Nokia C30 as yet.

Nokia C30's leaked images were shared by Nokiapoweruer. The renders show that the smartphone is expected to come in two colour options — Green and White. The dual rear camera setup is housed in a rounded camera module with a flash placed outside the circle. Mounted below is a rounded fingerprint scanner. At the front, the phone sports a waterdrop-style notch for the selfie camera and a thick chin with the Nokia branding.

The listing of the Nokia C30 on a Russian retailer site, 4Dealer, suggests that the smartphone will run Android 11 and sport a 6.82-inch Full-HD+ (1,080x2,400 pixels) display and a 20.5:9 aspect ratio. It is expected to be powered by an unidentified hexa-core 1.60 GHz chipset paired with 3GB of RAM. The Nokia C30 is also expected to have 64GB of onboard storage that can be expanded via a microSD card. It may pack a 6,000mAh battery.

For optics, Nokia C30 may come with a 13-megapixel primary rear camera, and the selfie camera is expected to have a 5-megapixel primary sensor. Connectivity options on the smartphone could include dual SIM support, Wi-Fi, Bluetooth v4.2, GPS, microUSB, and a 3.5mm headphone jack. Alongside the rear-mounted fingerprint scanner, Nokia C30 users may also be able to access the smartphone using the face-unlock feature. The smartphone is expected to measure 169.9x77.8x8.8mm and weigh 191 grams.

The Nokia C30 was also allegedly spotted on the US FCC certification site last month as reported by Nokiamob. The listing suggested that the smartphone will have the model number TA-1357, come with a 5,850mAh battery, and measure 177.7x79.1mm. It also listed some connectivity options — LTE, 2.4GHz Wi-Fi, and Bluetooth — for the smartphone.

Since the two listings appear to have some discrepancies, these leaks should be taken with a pinch of salt, especially since HMD Global is yet to officially confirm the Nokia C30.