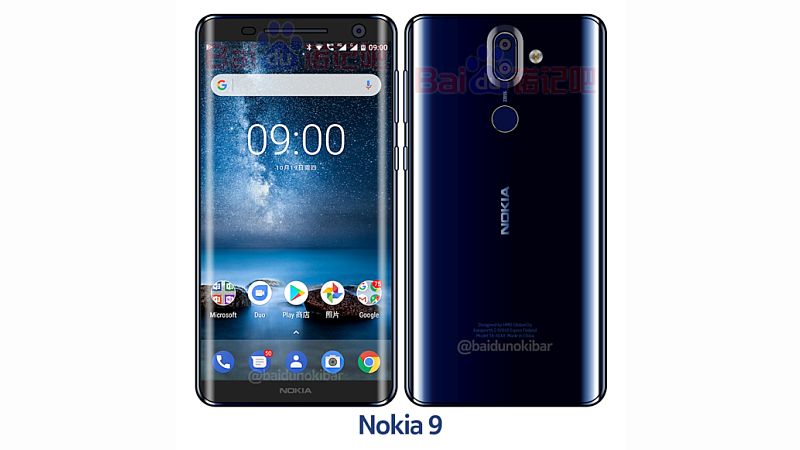 Nokia 9 is anticipated to be Nokia licensee HMD Global's next flagship smartphone, and it has been making the rounds of the Internet for months. The smartphone's has now been tipped in a mockup image, allegedly based on leaked information, giving a rough idea about the design of the handset and possible colours.

The mockup tips that the upcoming Nokia 9 may follow the current trend of premium smartphones, and will possibly sport an edge-to-edge display with an aspect ratio of 18:9. The front panel leak also suggests that the Nokia 9 may sport a curved display. Previous leaks have suggested that HMD Global will be using an OLED panel on the Nokia 9 though we will have to wait for the official launch to know for sure. The mockup shows the Nokia 9 in new Polished Blue colour.

Not too long ago, Nokia 9 was reportedly spotted on the company's website and seemingly showed the handset in promotional image. The mockup image was spotted by folks at NokiaPoweruser, and was first posted on Baidu. The same source had previously released a mockup with the same design, in a Copper colour variant.

A report from May indicated that the Nokia 9 price will be EUR 750 (roughly Rs. 55,100) - a price that will see it compete with flagships from other companies such as Samsung and Apple. Nokia 9 is expected to sport a dual camera setup at the back with two 13-megapixel Zeiss sensors with dual-LED flash support. It is said to sport a 5.5-inch QHD(1440x2560 pixels) display and be powered by Snapdragon 835 SoC.