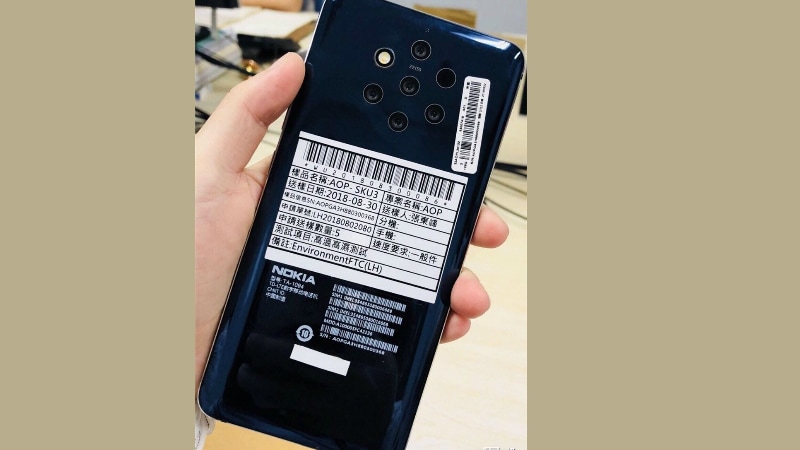 Nokia 9 is expected to run on Android Pie out of the box.

HMD Global's long-anticipated Nokia 9 was leaked earlier this week sporting a crazy camera setup, with as many as six cutouts at the back. In that leak, the Nokia 9 looked to sport three Zeiss-branded camera sensors, one flash module, and the purpose of the other two cutouts still remains unknown. Now, a fresh leak shows the back of the Nokia 9 once again, and this time it shows as many as seven cutouts placed perfectly in a hexagon shape. There are as many as five Zeiss-branded sensors seen at the back of this one.

This latest photo emerges out of China, in an ITHome forums page, and it shows a Nokia phone with model number TA-1094. The smartphone is seen sporting a glossy back, and has as many as seven cut outs. Out of the seven, five are claimed to be Zeiss-branded optics, and what looks like a Xenon flash sits on the top left edge of the cut outs. There's one more cut out, the purpose of which is unknown. There is no fingerprint sensor at the back, hinting at the possibility of an in-display scanner, or just its reliance on face unlocking - like the iPhone X and Oppo Find X

The Nokia 9 has been expected to launch since mid-2018, however a delay was reported due to issues with the camera setup. It was also then reported to launch at IFA as well, but that didn't happen either. Now, a vague timeline of sometime this year, or early next year lingers on, with no confirmation from HMD Global whatsoever.

Previous leaks suggest that the Nokia 9 will be based on Android One, and therefore can be expected to release with Android 9 Pie out-of-the-box. The smartphone is also expected to sport top-of-the-line specifications, with a 6.01-inch display with Gorilla Glass 5 protection, Snapdragon 845 SoC, 8GB of RAM, 256GB inbuilt storage, and a 3,900mAh battery. Earlier, the Nokia 9 was reported to sport triple cameras with 41-megapixel, 20-megapixel, and 9.7-megapixel sensors, complete with 4X optical zoom and Xenon and LED flash modules. All of the recent leaks do not corroborate with what has been leaked in the past, and we recommend you to take all of it with a pinch of salt.