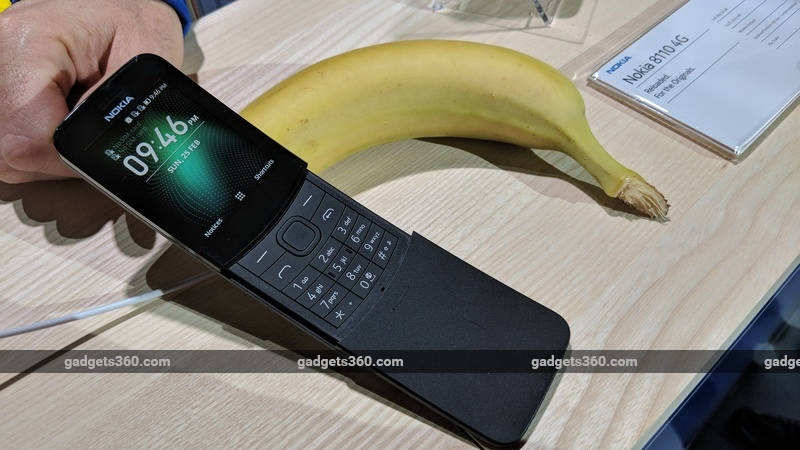 Reliance on Thursday announced that the KaiOS-based Jio Phone will soon get support for WhatsApp and YouTube, and they will be available starting August 15. If you are wondering whether the availability of WhatsApp is exclusive only to the Jio Phone, Nokia-licensee HMD Global has now officially teased WhatsApp support for the 'banana' phone - Nokia 8110 4G. The phone, which was unveiled at MWC 2018 as the successor to the legendary Nokia 8110, runs Smart Feature OS (based on KaiOS) that gives access to apps such as Google Assistant, Google Search, and Google Maps as well as includes a revamped Snake game. It does not have support for WhatsApp yet. But that might change soon.

HMD Global Chief Product Officer Juho Sarvikas, posted a tweet on Thursday mentioning the availability of WhatsApp on Jio Phone. His tweet reads as, "Oh look, WhatsApp on KaiOS! Looking forward to going [banana]s!" This suggests that the same feature could be coming to the company's 4G feature phone soon. One of the biggest problems with feature phones is that the popular chat app WhatsApp isn't available on them, forcing users to pay extra for a smartphone instead. While the Jio Phone is very popular in India with over 25 million subscribers, HMD Global will directly take on the giant if it introduces competitive features like WhatsApp support. With support for more popular apps, both the Jio Phone and Nokia 8810 4G can give competition to several low-end smartphones. Notably, it's unclear how the KaiOS version of WhatsApp will differ from messenger's Android or iOS apps in terms of functionality.

The Nokia 8810 4G feature phone is a take on the iconic original with the same name and retains the iconic curved slider design. It adds 4G VoLTE connectivity, a concession to the modern age, and is meant to serve as a 4G feature phone or a companion phone.

To recall some of the specifications, the dual-SIM (Micro+Nano) Nokia 8110 4G runs KaiOS-based Smart Feature OS and features a 2.45-inch QVGA (240x320 pixels) display. It is powered by a 1.1GHz dual-core Qualcomm Snapdragon 205 SoC, coupled with 512MB of LPDDR3 RAM. The handset has a 2-megapixel rear camera sensor with an LED flash.

Chrome, Firefox Pull Down 'Stylish' Browser Extension After Researcher Claims It Captures Web History
Next Xbox Specifications and Features Being Decided With Input from Japanese Developers