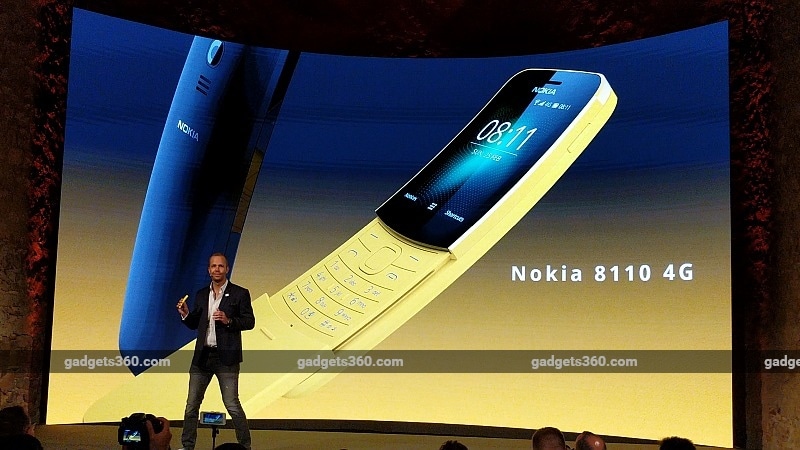 Nokia 8110 4G was launched by HMD Global at the Nokia Mobile launch event at MWC 2018. The new Nokia 8810 4G feature phone is take on the legendary original with the same name, and retains the iconic curved slider design. It adds 4G VoLTE connectivity, a concession to the modern age, and is meant to serve as a 4G feature phone or a companion phone. The Nokia 8110 4G 'slider' phone runs on a ‘Smart Feature OS’, with access to apps like Google Assistant, Google Search, and Google Maps, as a result of HMD Global's partnership with Google. These apps, along with Facebook and Twitter, will be integrated into the smartphone after an upcoming update. It also comes with a revamped Snake game.

Nokia 7 Plus Android One Smartphone With Dual Rear Cameras Announced

The dual-SIM (Micro+Nano) Nokia 8110 4G offering, and runs on a Smart Feature OS powered by Kai OS. It sports a 2.45-inch QVGA (240x320 pixels) display, and is powered by a 1.1GHz dual-core Qualcomm Snapdragon 205 SoC, coupled with 512MB of LPDDR3 RAM. It sports a 2-megapixel rear camera with LED flash, and there is no front camera onboard. The smartphone has an IP52 rating for dust and water resistance.

OnePlus 5, OnePlus 5T Get a Fix for HD Content Streaming, But It Isn't via OTA Update
Microsoft Data Warrant Case in Top US Court Has Global Implications