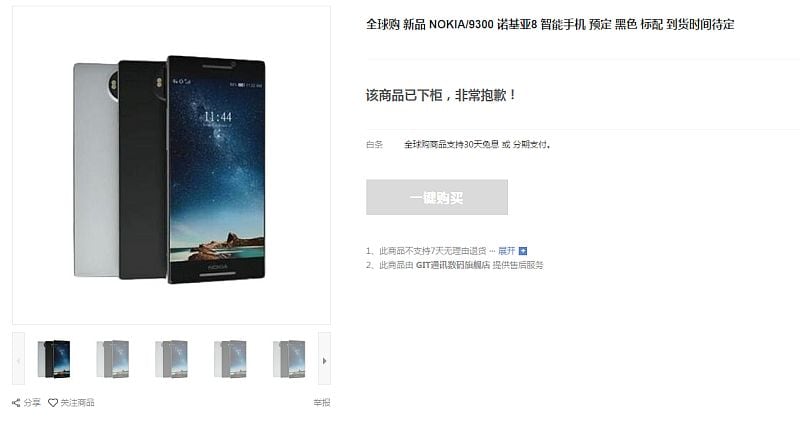 The Nokia 3310 reboot is expected to grab the eyeballs on Nokia's MWC 2017 event on February 26, but the flagship Nokia P1 or Nokia 8 smartphone will be the one that decides if the brand will be able to compete with flagship models from the stables of Apple, Samsung, and other major brands. While most of the key specifications of the Nokia 8 have already leaked online, the price remained unknown so far. However, a listing on JD.com has leaked the Nokia 8 price tag ahead of this week's launch.

The alleged Nokia 8 carries a price tag of CNY 3,188 (roughly Rs. 31,000) in the JD.com listing. Unfortunately, it's hard to confirm the authenticity of the online listing of the Nokia 8.

With less than a week left in the event slotted by HMD Global on Sunday, the e-commerce listing tips that we can expect the Nokia 8 to be announced. The images accompanied in the online listing appear to show concept renders of a Nokia smartphone with near bezel-less display.

On the specifications front, the rumoured Nokia 8 is said to be powered by Qualcomm's latest Snapdragon 835 processor while sport a 5.7-inch QHD Super AMOLED display. The handset is further likely to feature a 24-megapixel rear camera with OIS alongside a 12-megapixel front camera. Nokia 8 is expected to be announced in two storage versions - 64GB and 128GB. Both the models are rumoured to come with expandable storage support via microSD card slot (up to 256GB). It is said to run Android 7.0 Nougat.

For the upcoming event, HMD Global is widely expected to bring back the refresh of the Nokia 3310 feature phone which has hogged all the limelight. Other Nokia phones expected to debut later this week include two budget Nokia devices - Nokia 3 and Nokia 5. Nokia 6, the smartphone touted as the comeback device for Nokia, is also expected to see global availability details out at the same event.

The official HMD Global event is set to take place in Barcelona on Sunday, and it will kick off at 4:30pm local time (9pm IST).