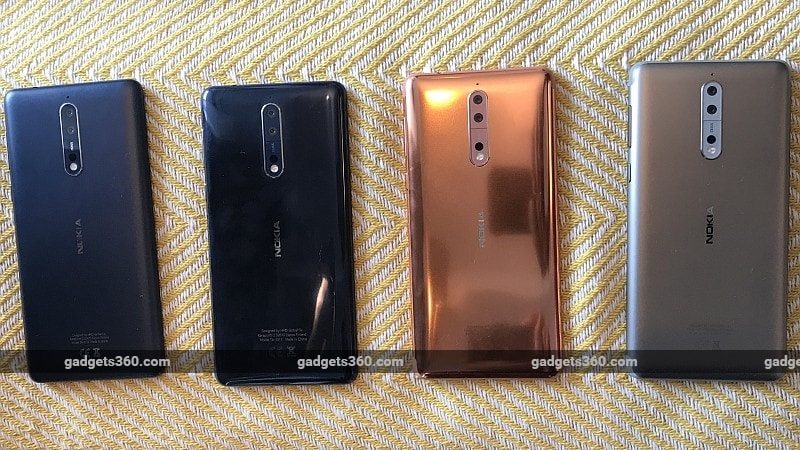 Nokia 8 price in India would have been the biggest question on everyone's mind before the launch on Tuesday, but the mystery has been unravelled ahead of the event. The Nokia 8 India launch is set for 11:30am IST in New Delhi, but an Amazon listing has revealed how much the device will cost in the country. The Nokia 8 price in India has been set as Rs. 36,999, according to the phone's listing page on the e-commerce site; the listing has been taken down now, and currently points users to a 'Notify Me' page. The listing also suggests the handset will be exclusively available on Amazon India. With Nokia 8 price in India as Rs. 36,999, the smartphone will give competition to rivals such as OnePlus 5 and LG G6, which are also priced under Rs. 40,000 and offer similar hardware.

Notably, it appears HMD Global is bringing the 4GB RAM, 64GB storage variant to India, with no mention of the recently spotted 6GB RAM, 128GB storage variant at the moment. Of course, the biggest selling point of the Nokia 8 is the 'bothies' feature, which lets users take videos and photos from the front and rear cameras simultaneously. To recall, the smartphone was first unveiled last month, at an event in London.

The Nokia 8 sports a unibody design and has been built out of 6000-series aluminium. It was launched in glossy Polished Copper and Polished Blue colours, as well as matte Tempered Blue and Steel finishes. The Nokia 8 is IP54 rated, which means it is splash-proof.

The Nokia 8 runs Android 7.1.1 Nougat, with a promise to update to Android 8.0 Oreo. It is powered by a Qualcomm Snapdragon 835 SoC, coupled with 4GB of RAM. Thee Nokia 8 features a 5.3-inch 2K LCD display with Gorilla Glass 5 protection.

It sports two 13-megapixel cameras with RGB and monochrome sensors, developed in partnership with Carl Zeiss. The Nokia 8's front camera is the same 13-megapixel RGB shooter seen on the rear, and both front and rear cameras are capable of recording 4K video on their own. The Nokia 8 rear camera comes with laser autofocus and dual-tone LED flash.