Nokia 8 Spotted on Official Site; Is This the Official Release Date? 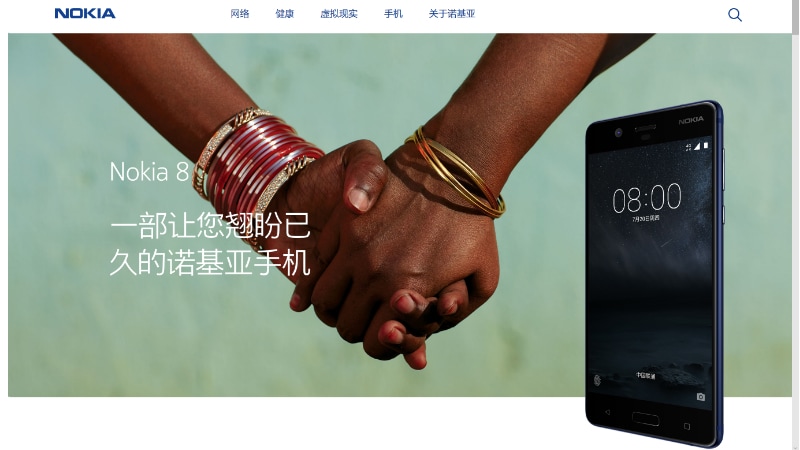 Nokia 8 is expected to be the next big Nokia Android phone to hit the market, and the true flagship of the series that only has affordable models so far. After several Nokia 8 press renders, the company’s official site has now given away the smartphone’s details, and has also hinted at a possible launch date as well. The Nokia 8 flagship smartphone was spotted on the official Chinese site hinting at an imminent launch. Furthermore, the date on the smartphone’s display outs a possible launch later today.

The Nokia 8 was spotted briefly on the official site in China. A screen grab of the same was posted on social site Baidu, and it clearly shows the Nokia 8 from the front corroborating the press render image design leaked earlier. The Nokia 8 is seen sporting a Home Button in the front, a blue-coloured body, and top and bottom bezels. Capacitive keys lie on both sides of the Home Button as well.

There’s a date on the lock screen, and it indicates that the Nokia 8 may launch today itself. This refutes previous rumours of a July 31 launch. In any case, almost all details of the Nokia 8 have been leaked, and it’s only a matter of time before HMD Global makes it official.

Apart from the Blue colour variant, a Silver colour Nokia 8 variant has also been tipped recently. The Nokia 8 price is largely expected to be EUR 589 (roughly Rs. 43,400). It is expected to sport a metal body and a vertical dual camera setup at the back. The lenses are tipped to be made by Zeiss, making this the first smartphone to be leaked after the announcement of HMD Global and Zeiss partnership earlier this month. At launch, the Nokia 8 may be available in four colour options - Blue, Steel, Gold/Blue, and Gold/Copper.

The Nokia 8 is tipped to run on Android 7.1 Nougat and sport a 5.3-inch QHD display. It is expected to be powered by the Snapdragon 835 processor. Nokia 8 may launch with 4GB RAM and 64GB storage initially, though the rumoured 6GB RAM and 8GB RAM variants may see the light of the day a little bit later. Two 13-megapixel rear lenses from Carl Zeiss are a possibility, and a 13-megapixel front camera is expected as well. The dimensions of the Nokia 8 are tipped to be at 151.55x73.7mm.

Can Jio and Nokia Give Feature Phone Sales a Big Boost?
OnePlus 5 Emergency Call Issue to Be Fixed via Software Update [Now Rolling Out]