Nokia 7 Plus Is an Android One Smartphone With 6-Inch Display, and Dual Rear Zeiss Cameras 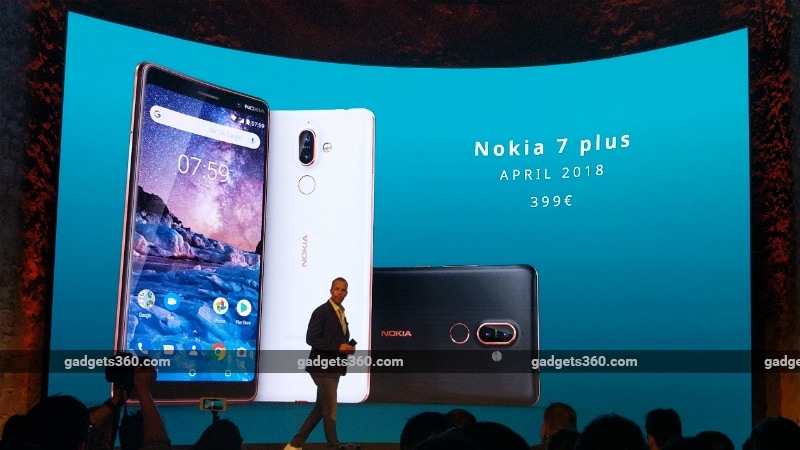 Nokia 7 Plus is a smartphone designed for "creators," HMD Global says

Nokia 7 Plus was launched at the HMD Global launch event in Barcelona on Sunday, ahead of MWC 2018. The Android One smartphone has been designed for ‘creators’, the Finnish company said, and sports a dual rear camera setup just like the original Nokia 7. The company is touting the use of Zeiss optics on the rear camera, as well as its capabilities in the realm of low-light photography. It offers the Bothie feature first seen on the Nokia 8, and also bears a 6-inch 18:9 display – the first smartphone from the company to bear the longer, more immersive display aspect ratio. The smartphone sits above the Nokia 7 in the HMD Global Nokia Android smartphone lineup, and below the Nokia 8.

The Nokia 7 Plus price has been set as EUR 399 (roughly Rs. 31,750), excluding taxes and subsidies, what HMD Global is referring to as the global average retail price. For now, the Nokia 7 Plus price in India has not been detailed by the company. It will be available from early April in Black/ Copper and White/ Copper colour variants.

The Nokia 7 Plus runs Android 8.0 Oreo, and being an Android One offering, has no customisations on top of the stock Android it uses. The company is also promising regular updates. The smartphone bears a 6-inch full-HD+ (1080x2160 pixels) IPS display with an 18:9 aspect ratio, 500-nits peak brightness rating, and Corning Gorilla Glass. It is powered by an octa-core Qualcomm Snapdragon 660 SoC complete with 4GB of LPDDR4 RAM.

The Nokia 7 Plus has 64GB of inbuilt storage, expandable via microSD card (up to 256GB). It offers 4G VoLTE, Wi-Fi 802.11ac, Bluetooth v5.0, GPS/ A-GPS, NFC, USB Type-C (2.0), and a 3.5mm audio jack. Sensors on board include an accelerometer, ambient light sensor, digital compass, gyroscope, proximity sensor, and a rear-facing fingerprint sensor. The company is also touting the presence of a single speaker with a smart amplifier and Nokia spatial audio with 3 mics. It measures 158.38x75.64x7.99mm (going up to 9.55mm around the camera bump). It bears a 3800mAh battery with fast charging, rated to deliver a talk time up 19 hours and a standby time of 723 hours.