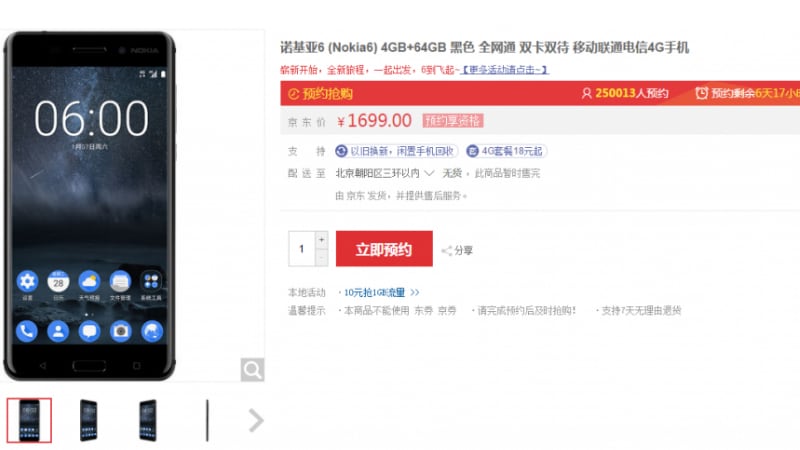 HMD Global, the company that now owns the rights to the Nokia brand, unveiled the Nokia 6 last week. The new Nokia 6 smartphone will be sold via a flash sale on January 19 exclusively on JD.com in China. The registration window for the Nokia 6 sale has opened up, and the Nokia 6 has reportedly garnered as many as 250,000 registrations in just 24 hours.

PlayfulDroid reports that the mid-ranger Nokia 6 has managed to rake in more than 250,000 registrations on the first day. This is a big milestone in Nokia's comeback journey, and a testimony to the fact that Nokia still has its fair share of loyalists out there.

On paper, the Nokia 6 is a rather forgettable device with nothing new to offer when compared to other mid-rangers out there. The Nokia 6 smartphone is priced at CNY 1699 (roughly Rs. 16,750). The smartphone runs Android 7.0 Nougat, and it sports a 5.5-inch full-HD display protected by a 2.5D Gorilla Glass. Nokia 6 is powered by the Qualcomm Snapdragon 430 SoC alongside 4GB of RAM and 64GB of internal storage. The dual-SIM Nokia 6 smartphone is backed by a 3000mAh non-removable battery.

The unibody Nokia 6 is built using 6000 series aluminium and its home button has an embedded fingerprint scanner. It packs a f/2.0 16-megapixel rear camera with phase detection auto focus and dual-tone flash, as well as an 8-megapixel f/2.0 front camera for selfies. The new Nokia 6 smartphone also includes Dolby Atmos tech and 'dual amplifiers' for louder sound. HMD Global is also expected to launch more Nokia Android phones on February 26, with invites for MWC event sent out on Thursday.