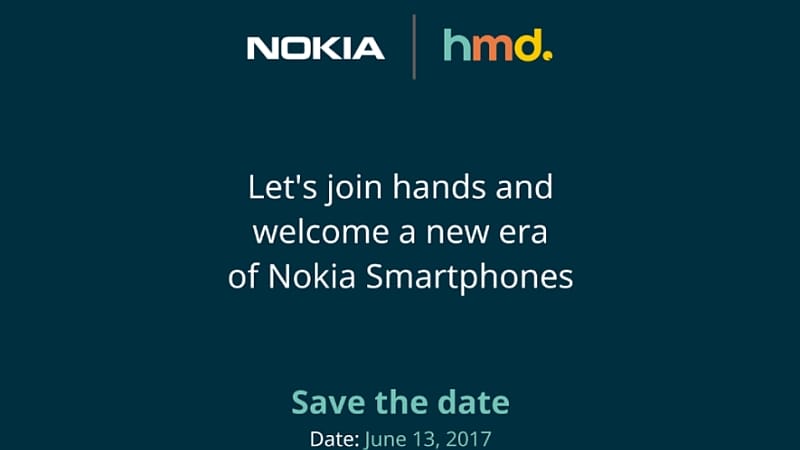 While HMD Global sent out press invites earlier this month for a Nokia event on June 13, the company has now confirmed that it will be launching Nokia smartphones at this event. This means that the company can expectedly launch its Nokia 6, Nokia 5, and Nokia 3 Android smartphones finally in India next week. HMD Global invites doesn't mention the devices, but only says "welcome the new era of Nokia Smartphones." To recall, the new Nokia 3310 was launched in India in mid-May at a price of Rs. 3,310 via offline stores.

Nokia 6, the best-specced of the new Nokia Android phones, has a 5.5-inch full-HD screen with 2.5D design and Gorilla Glass protection, and a fingerprint sensor. The smartphone was priced at EUR 229 (approximately Rs. 16,000) and runs Android 7.0 Nougat. It is powered by Snapdragon 430 SoC, packs 3GB RAM, features 32GB internal storage, comes with microSD card support up to 128GB, and houses a 3000mAh battery.

Nokia 5, positioned as a handset for those who want a compact smartphone, was priced by the company at EUR 189 (about Rs. 13,250) and features a fingerprint sensor. It comes with a 5.2-inch HD screen and Android 7.1.1 Nougat operating system. It is powered by the Snapdragon 430 SoC coupled with 2GB of RAM, and comes with 16GB inbuilt storage; it supports expandable storage via microSD card (up to 128GB). When it comes to camera, Nokia 5 has a 13-megapixel unit on the back and 8-megapixel unit in front. Other features of the smartphone include Micro-USB 2.0, NFC, 3000mAh battery, and 4G LTE support.

Notably, HMD Global this week also confirmed that the Nokia 3, Nokia 5, and Nokia 6 smartphones will be receiving the latest Android iteration, Android O, when it's available.