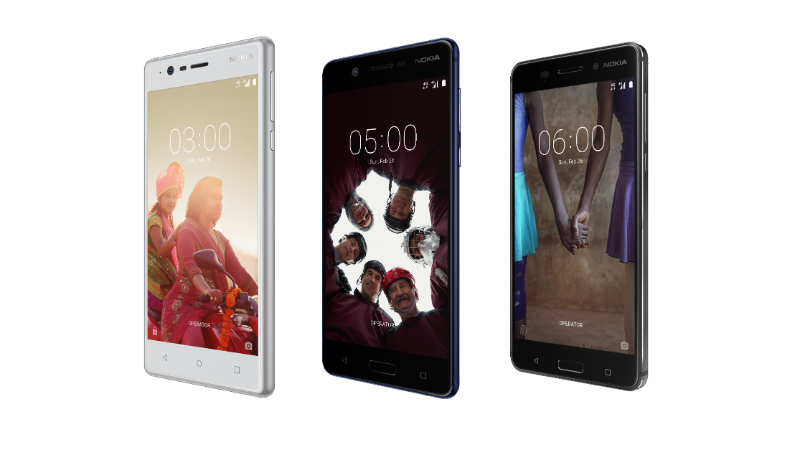 Nokia 6, Nokia 5, and Nokia 3 India launch event is over, and all the details of the three smartphones have been officially announced. The prices in India of Nokia 6, Nokia 5, and Nokia 3, as well their respective release dates have been revealed by HMD Global. The company also revealed that all the Nokia phones in India will now be manufactured within the country. Notably, these are the first Nokia smartphones to hit the Indian market since the Lumia brand dropped the Nokia moniker under Microsoft’s ownership. Moreover, these are the first Nokia-branded phones with stock Android as the software, instead of a heavily tweaked version of the popular mobile OS.

Nokia 6 price in India is Rs. 14,999, and the smartphone will be exclusively available on Amazon India. Registrations for the Nokia 6 sale will begin on July 14 on Amazon, and as a launch offer, those who purchase the phone from using their Amazon Pay balance will get a Rs. 1,000 discount.

On the other hand, Nokia 3 and Nokia 5 are both offline-exclusive products, and will be available via over 80,000 retail stores that stock the company's handsets. The Nokia 3 price in India is Rs. 9,499 and it will go on sale starting June 16, while the price in India of Nokia 5 is Rs. 12,899, and pre-bookings for the handset will begin on July 7.

Nokia 6, the best-specced of the new Nokia-branded Android phones announced so far, features a 5.5-inch full-HD 2.5D screen with Corning Gorilla Glass protection, and a fingerprint sensor below the display. The Nokia 6 runs on Android 7.0 Nougat and was powered by Snapdragon 430 processor coupled with 3GB of RAM. The handset will come with 32GB inbuilt storage, and will support microSD card support up to 128GB, and houses a 3000mAh battery. The Nokia 6 sports a 16-megapixel rear sensor, while the front camera's resolution is 8-megapixel. Featuring body made using 6000 series aluminium, the smartphone comes with in-built dual speakers and Dolby Atmos support, and is aimed at those who want great design and specifications.

Nokia 5 has been targeted to those who want a compact smartphone, and features a fingerprint sensor. For specifications, it comes with a 5.2-inch HD display, and Android 7.1.1 Nougat. The Nokia 5 is powered by the Snapdragon 430 processor coupled with 2GB of RAM, and comes with 16GB inbuilt storage. It also supports expandable storage via microSD card (up to 128GB). Nokia 5 packs a 13-megapixel sensor on the back and an 8-megapixel sensor at the front. Other features of the smartphone include Micro-USB 2.0, NFC, 3000mAh battery, and 4G LTE support.

Lastly, Nokia 3 is targeted at those who are looking for a premium-looking handset at a budget. It comes with a polycarbonate body and metallic frame on the sides. For specifications, the Nokia 5 features a 5-inch HD display, Android 7.0 Nougat, 1.3GHz quad-core MediaTek 6737 SoC, 16GB storage, up to 128GB microSD card support, Micro-USB 2.0, NFC, 2650mAh battery, and 8-megapixel cameras on the front and back.