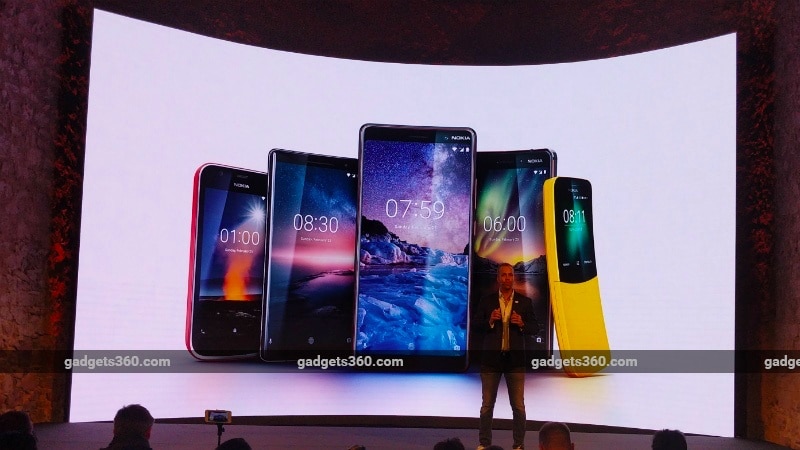 Nokia 6 (2018), Nokia 7 Plus, and Nokia 8 Sirocco India launch is expected today at an event HMD Global is hosting in New Delhi. The Nokia India launch event kicks off at 12pm IST, and HMD Global will be live streaming it on the Nokia Mobile India Facebook page. To recall, the Nokia 6 (2018), Nokia 7 Plus, and Nokia 8 Sirocco Android One smartphones were unveiled at MWC 2018, alongside the Nokia 1 and Nokia 8110 4G. The budget Nokia 1 has already been launched in India, and as per the HMD Global roadmap revealed to Gadgets 360 at Barcelona, the Nokia 8110 4G will only make its way to Indian shores later this year.

The Nokia 6 (2018) will be available in single-SIM and dual-SIM variants, depending on the region. It runs Android 8.0 Oreo, and as we mentioned, the smartphone is an Android One offering, with the promise of stock Android and swift updates. The smartphone sports a 5.5-inch full-HD (1080x1920 pixels) IPS display complete with Gorilla Glass 5, and is powered by the octa-core Qualcomm Snapdragon 630 SoC, with 3GB or 4GB of LPDDR4 RAM.

Nokia 7 Plus specifications
The Nokia 7 Plus runs Android 8.0 Oreo, and being an Android One offering, has no customisations on top of the stock Android it uses. The company is also promising regular updates. The smartphone bears a 6-inch full-HD+ (1080x2160 pixels) IPS display with an 18:9 aspect ratio, 500-nits peak brightness rating, and Corning Gorilla Glass. It is powered by an octa-core Qualcomm Snapdragon 660 SoC complete with 4GB of LPDDR4 RAM.

The Nokia 7 Plus has 64GB of inbuilt storage, expandable via microSD card (up to 256GB). It offers 4G VoLTE, Wi-Fi 802.11ac, Bluetooth v5.0, GPS/ A-GPS, NFC, USB Type-C (2.0), and a 3.5mm audio jack. Sensors on board include an accelerometer, ambient light sensor, digital compass, gyroscope, proximity sensor, and a rear-facing fingerprint sensor. The company is also touting the presence of a single speaker with a smart amplifier and Nokia spatial audio with 3 mics. It measures 158.38x75.64x7.99mm (going up to 9.55mm around the camera bump). It bears a 3800mAh battery with fast charging, rated to deliver a talk time up 19 hours and a standby time of 723 hours.

Nokia 8 Sirocco specifications
The Nokia 8 Sirocco runs Android 8.0 Oreo and sports a 5.5-inch QHD (1440x2560 pixels) pOLED display with 3D Corning Gorilla Glass 5. It is powered by an octa-core Qualcomm Snapdragon 835 SoC coupled with 6GB of LPDDR4X RAM. It bears a 12-megapixel wide-angle sensor on its primary rear camera, complete with an f/1.75 aperture and 1.4-micron pixels. This is accompanied by a 13-megapixel telephoto lens capable of providing 2x optical zoom, and featuring an f/2.6 aperture, and 1-micron pixels.

The dual rear camera setup features a dual-tone LED flash as well as Zeiss optics, making it in fact completely identical to the Nokia 7 Plus that was also unveiled at the event. The Nokia 8 Sirocco front camera bears a 5-megapixel sensor paired with a fixed focus lens, f/2.0 aperture, and 1.4-micron pixels.