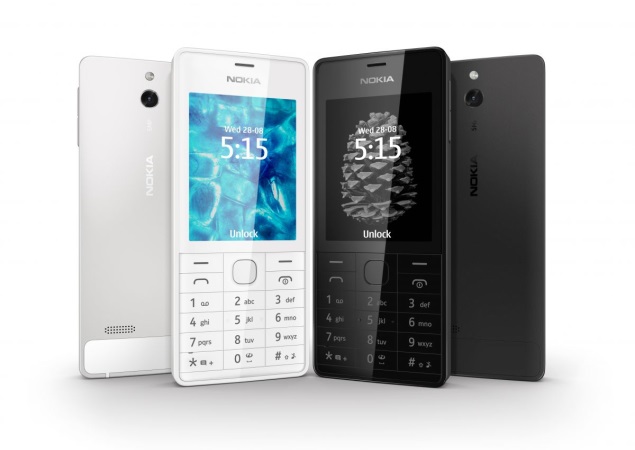 Nokia has launched the Nokia 515 to expand its feature phone portfolio. The newly launched feature phone will be available in single and Easy Swap dual-SIM variants.

The Nokia 515 body is built from a single piece of anodised, sandblasted aluminium while the display features the scratch resistant Gorilla Glass 2 and is polarised for use under the sun. It features a 2.4-inch QVGA display with 240x320 pixels and boasts a pixel density of 166ppi. The phone runs on Nokia's Series 40 software and includes 64MB of RAM. It measures 114x48x11mm and weighs 101.1grams for single SIM and 102.7 grams for dual-SIM variant.

Nokia 515 includes 256MB of internal memory which can be expandable up to 32GB via microSD card. It sports a 5-megapixel rear camera with LED flash and the camera includes options like voice-guided self-portrait for taking self-shots with the rear camera, Sequential shots and Panorama. Connectivity options include Bluetooth, EDGE, GPRS, Micro-USB and 3G, while there is no Wi-Fi in the device. The Nokia 515 supports Micro-SIM instead of regular SIM.

There are some pre-loaded apps like Facebook, Twitter, Nimbuzz and Mail for Exchange that allows users people to check work email and sync their calendars and contacts on-the-go. The device also includes 1200mAh battery that can deliver up to 528 hours of standby time and talk time of about 10 hours.

The Nokia 515 will begin shipping in the third quarter of 2013, starting with markets like Russia, Germany, Switzerland and Poland. It will have an expected retail price of $149 or 115 EUR before taxes and subsidies.