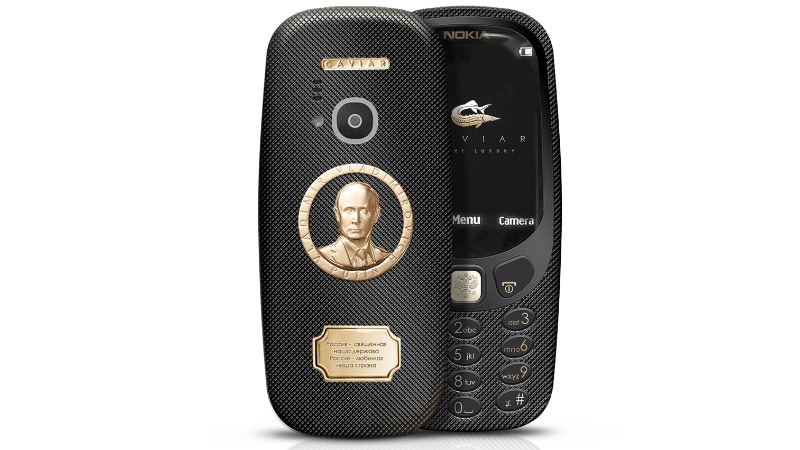 The rebirth of Nokia 3310 has met with a lot of rekindled interest and buzz. The feature phone with a budget price tag is expected to launch in various markets around the world soon. Now, a firm from Russia has created a premium variant of the Nokia 3310 (2017) made with gold and titanium materials, complete with the Russian President Vladmir Putin's face embossed at the back, along with a quote from the national anthem of the country.

The new Nokia 3310 Supremo Putin variant comes in black with gold plating, dotted titanium housing, and Putin's face in gold on the back. Right below it is the national anthem embossed on a gold plate for stringing the patriotic chords of those with lots of disposable cash. The premium Nokia 3310 made by Russian firm Caviar is priced at a whopping RUB 99,000 (roughly $1,700 or Rs. 1,13,200). The home button bears the Russian Federation's coat of arms.

Caviar is known to make design-heavy versions of iconic phones, and Nokia 3310 has made it to the list. The premium variant will come in a savvy red box as well, if that's something that entices you. Presumably, this variant will be made available in Russia only. All the specifications and internals will remain the same.

HMD Global's Vice President India, Ajey Mehta told Gadgets 360 that the launch of the Nokia 3310 will happen sometime by the end of May in India. While the Nokia 3310 will work fine in India with its current supported network bands, the device will be useless in many regions like Canada and the US that do not support old bands like 900MHz and 1800MHz. Also, the Nokia 3310 won't connect to the Reliance Jio network in India. Other markets that the feature phone is heading to are Middle East, Asia Pacific, Africa, and Europe.