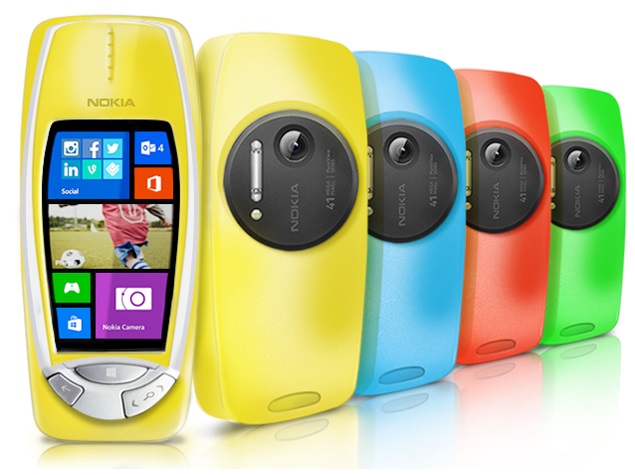 Just when one thought that Nokia will launch even more products in its Nokia X family running Android or new Lumia devices based on Windows Phone 8.1, April Fools' Day comes and Nokia announces its heritage 3310 in a new avatar.

The Nokia 3310, which was initially launched in 2000 and is one of the most successful phones ever released by Nokia, has made a modern-day comeback.

The Finnish giant has introduced its 3310 sporting a 41-megapixel PureView sensor with Zeiss optics and Xenon flash. Further, the 3310 is seen boasting a huge camera hump at the back panel, much like Nokia 808 PureView and Nokia Lumia 1020.

The Nokia 3310 PureView will be available in Blue, Dark Blue, Green, Red and Yellow colour variants.

The revamped Nokia 3310 is a touchscreen device and also sports three soft-touch navigation buttons, alongside a Windows Phone 'home' button.

Nokia notes that the Nokia 3310 will be rolled out with 3G connectivity, while LTE-enabled devices will follow later this year.

Commenting on the Juha Alakarhu, Nokia's Head of Imaging Technologies said, "I'm really excited that we've found a way to marry our innovative PureView technology with such a beloved device. With its durable design and iconic look, we think even more people will enjoy our signature PureView magic."

Earlier on Tuesday, HTC and Samsung both showed off smart-gloves on April Fools' Day.

Samsung hit the hammer first, announcing its first 'all-over-hand' wearable device dubbed Samsung Fingers that features a flexible Super Emo-LED for the technology-sensitive consumer. HTC on the other hand teased its HTC Gluuv, which is also a smart-glove.

Google, despite being one of the biggest tech companies showed off its unique sense of humour and that's most apparent on April 1 every year. The Mountain View giant has a long list of gags that include Google Pokemon Maps, Gmail Shelfie, Emoji Translate in Chrome, Auto Awesome Photobombs, Google Magic Hand, Nest Total Temperature Contro and WazeDates.