Nokia 3.4, codenamed DoctorStrange, will allegedly have a hole-punch screen. 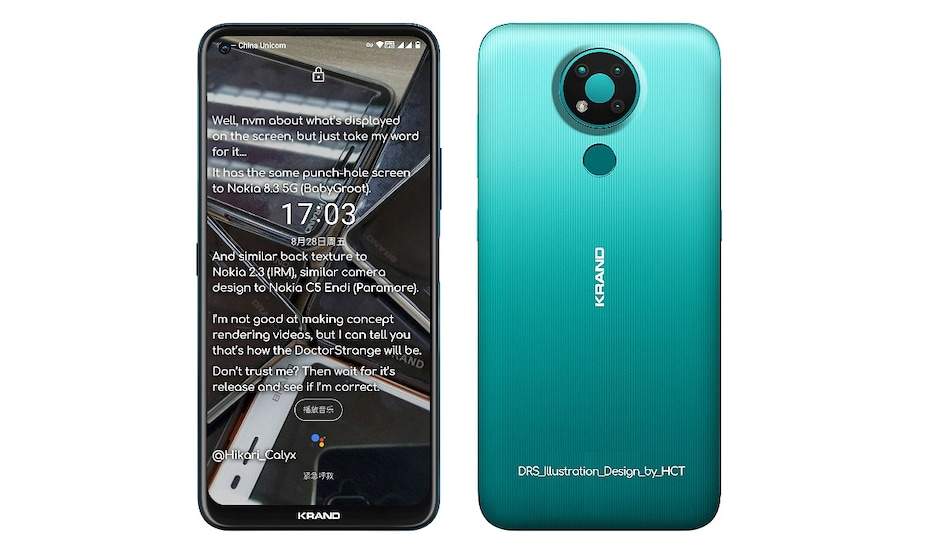 Nokia 3.4 alleged render shows that the phone will have a circular camera module

Nokia 3.4 alleged render has been leaked by a tipster, suggesting that the phone may feature a circular camera module and a hole-punch screen design. Key specifications of the phone, codenamed DoctorStrange, were spotted a couple of weeks ago on Geekbench. The phone is expected to be powered by the Qualcomm Snapdragon 460 SoC, paired with 3GB of RAM. Nokia brand licensee HMD Global will likely launch the phone alongside the Nokia 2.4 at the IFA 2020 trade show, set to take place in Berlin from September 3 to September 5.

Although the render is unofficial, it shows key details of the upcoming Nokia 3.4. As per a tweet by known Nokia tipster Hikari Calyx, the phone will come with a hole-punch display at the front that is expected to house an 8-megapixel camera, according to a GSMArena report. The back panel has a circular camera module, with three image sensors and an LED flash. The render also suggests the presence of a fingerprint scanner placed below the module.

In the tweet, Calyx claims to have actual pictures of the Nokia 3.4, but says that those can't be showed due to safety reasons, and that the render was based on those pictures.

Nokia 3.4 was allegedly spotted on Geekbench recently, showing possible specifications of the phone. It is expected to be powered by a Snapdragon 460 SoC, paired with 3GB of RAM.

HMD Global will be participating in IFA 2020, set to take place between September 3 and September 5 in Berlin. The company is likely to unveil a few Nokia phones at the show, including Nokia 3.4, codenamed DoctorStrange, and Nokia 2.4, codenamed Wolverine.