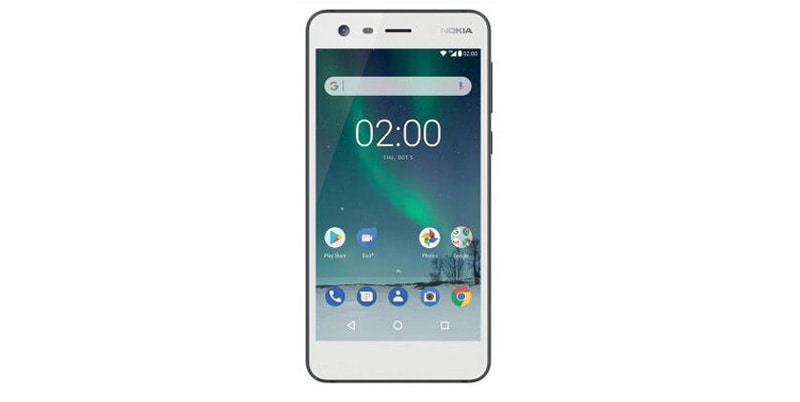 Nokia 2 India launch event is scheduled to start at 11:30am IST

Nokia 2 is widely expected to launch in India on Tuesday as HMD Global gears up to tap the budget segment of the Indian smartphone market. The upcoming Nokia 2 is likely to be positioned under the Nokia 3, and feature low-end specifications and Android Nougat. Now, the key Nokia 2 specifications have been leaked online via an Antutu listing, which mentions the codename Nokia TA-1035; this codename is thought to be of a global variant of the handset, matching the model that recently received Bluetooth certification. While the wait is short for the upcoming handset, this leak suggests the phone will compete against the likes of Xiaomi Redmi 4A and Moto C in India.

The Nokia 2 listing reveals that the smartphone has a HD (720x1280 pixels) resolution display that would come in 5-inch size. Further, it reveals the presence of Qualcomm's Snapdragon 212 SoC on the new Nokia handset. The SoC is the successor to the Snapdragon 210 and is designed as an entry-level offering with four cores of ARM Cortex-A7 CPU at a maximum clock speed of 1.3GHz. Moreover, all this is an upgrade to what was reported regarding the Nokia 2 until now.

Apart from the quad-core processor, the Snapdragon 212 SoC has Adreno 304 GPU and is accompanied by 1GB of RAM on the Nokia 2, as per the AnTuTu listing. The smartphone also appears to have 8GB of inbuilt storage and run on Android 7.1.1 Nougat. Besides, the upcoming Nokia smartphone is listed with 5-megapixel and 8-megapixel camera sensors that are likely to be available on its front and back, respectively.

HMD Global is hosting a press event in Gurugram on October 31, Tuesday, where it is expected to launch the Nokia 2 for the Indian market. The Nokia 2 price in India is expected to be lower than that of Nokia 3, which was launched at Rs. 8,800, if we believe a recent retailer listing. Furthermore, it would help the Nokia brand regain its charm in the mobile handset market. We'll give more details on the new launch by HMD Global following its official disclosure. So, stay tuned.