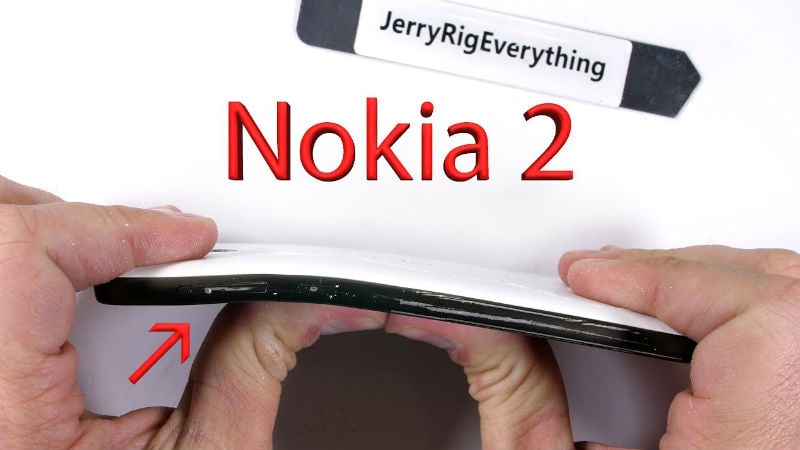 Nokia 2, the most affordable smartphone from HMD Global, recently underwent a rigorous durability test on JerryRigEverything's YouTube channel. This durability test involved scratching, burning, and bending the Nokia 2 to determine how durable the phone is.

Starting off with the scratch test, JerryRigEverything determined that the Nokia 2's IPS LCD display will scratch on level 6 of the Moh's scale. Next, he tested out the front camera and the capacitive buttons on the bottom of the display. Both of them are protected by the same front glass giving them a similar level of durability. The earpiece, although, can be easily damaged.

On the back of the phone, the Nokia logo (made out of metal) easily scratched on impact. Additionally, the rear sensor on the Nokia 2 is protected by glass, which is surprisingly more durable than the inferior plastic used on the Nokia 3 that costs more.

Moving on to the burn test, the Nokia 2 lasted for a total of 5 seconds on exposure. The IPS LCD display on the smartphone, however, brought back pixels to life within seconds of the test.

The bend test of the Nokia 2 caused a slight flex on the phone, while the display and the frame remained intact. This flex, claims JerryRigEverything, is not a big deal for cheaper smartphones and instead shows the durability offered in the entire Nokia range of smartphones. He has previously performed durability tests for other Nokia phones like the Nokia 3, Nokia 5, Nokia 6, Nokia 8, and Nokia 3310.

The dual-SIM Nokia 2 is based on Android 7.1.1 Nougat and features a 5-inch HD (720x1280 pixels) IPS LCD display. The smartphone is powered by a 1.3 GHz quad-core Qualcomm Snapdragon 212 SoC and 1GB of RAM. The Nokia 2 packs an 8-megapixel rear camera and a 5-megapixel front camera for selfies and video calling. It has a 4000mAh non removable battery, and HMD Global promises a 2-day battery life on the Nokia 2.