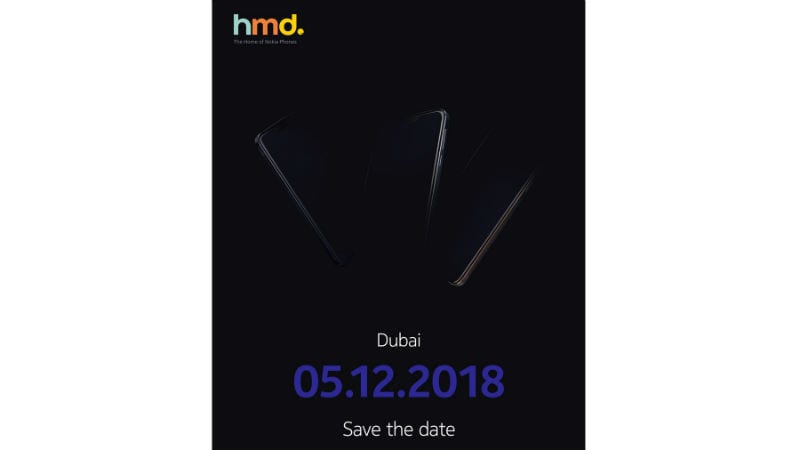 Nokia brand licensee HMD Global has launched a number of smartphones in 2018, but it is not done yet. The company has now announced another hardware event that is set to take place on December 5 in Dubai. HMD Global's Juho Sarvikas has informed about an #ExpectMore event where the company will be launching three smartphones. At the moment, there is no official information on the names of the handsets that will get unveiled. However, speculations are rife that HMD Global may release the Nokia 8.1, Nokia 2.1 Plus, and the hotly anticipated Nokia 9.

Sarvikas, who is HMD Global's Chief Product Officer, confirmed the launch event via his Twitter account. He also posted a teaser image along with the caption #ExpectMore. Unfortunately, the company has not announced what handsets will be launched at the December 5 event in Dubai. The image posted by Sarvikas hints that two of the smartphones have display notches. As per previous reports, an upcoming Nokia 8.1 is expected to come with a notch. Also, the Nokia 7.1 Plus is yet to be launched globally. Notably, it is still not clear which of the two handsets is the global variant of the Nokia X7 that was launched in China.

Additionally, Nokia 2.1 Plus may also get unveiled at the event, likely to come with a notch as well. Meanwhile, the handset seen without the notch in the teaser image is expected to be the highly-awaited Nokia 9. Earlier reports had suggested that the smartphone with a Penta-camera setup may not come with a display notch.

Based on recent reports, the Nokia 9 will run Android 9 Pie out-of-the-box and feature a 6.01-inch display along with a Gorilla Glass 5 protection. It is also rumoured to have a Qualcomm Snapdragon 845 SoC, coupled with up to 8GB of RAM and 256GB of inbuilt storage. There could be single and dual-SIM options and a 4,150mAh battery.

The long-anticipated Nokia 9 with its rumoured Penta-lens camera setup was expected to be HMD Global's rumoured flagship for 2018 despite being delayed on multiple occasions. However, a previous report had claimed that the smartphone may not be unveiled this year at all and instead launch at MWC 2019 early next year. Since major flagships are unlikely in the month of December, we are not entirely sure that the Nokia 9 will make it to the Dubai event. It is expected that we will get more details about the smartphones in the run-up to the unveiling.