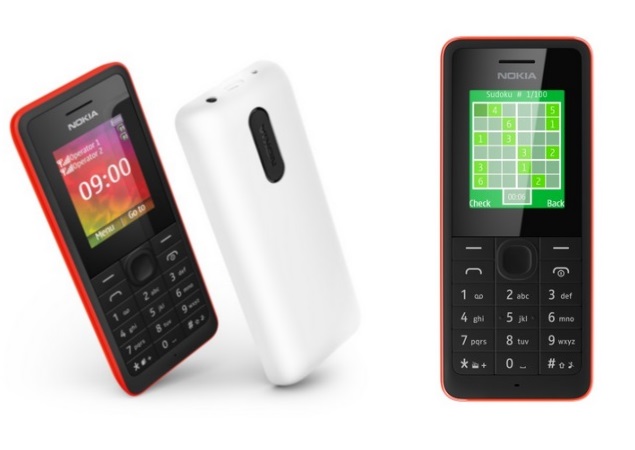 Both newly launched phones have almost identical design but a major difference is that the Nokia 106 is single SIM while the Nokia 107 comes with dual-SIM support.

The Nokia 106 features 1.8-inch QVGA display with 128x160 pixels resolution and sport a pixel density of 114ppi. The device can store up to 500 contacts and also includes 32-polyphonic ringtones. The Nokia 106 comes with an 800mAh battery that the company claims can deliver up to around 10 hours of talk time and 840 hours of standby time, which is around 35 days. The device supports a single SIM but instead of a regular SIM it uses Micro-SIM. Other features include alphanumeric keypad, FM Radio and 3.5mm audio jack. Nokia 106 weighs around 74.2 grams.

The Nokia 107 also sports a 1.8-inch QVGA display with similar features as the Nokia 106. It packs a 1020mAh battery that can deliver up to 12.7 hours of talk time and around 835 hours of standby time, as per Nokia's claims. It supports dual-SIM (GSM+GSM) with dual SIM standby. The device comes with microSD card support up to 16GB. The Nokia 107 also supports Micro-SIM instead of regular SIM. The Nokia 107 dual-SIM weighs around 75.8 grams.

Both the handsets have been announced for Chinese market. The Nokia 106 will retail for $23 while the Nokia 107 will come for $25, excluding taxes and subsidies. The handsets are only expected to hit market in the third quarter. There is no word about the device's availability in other countries, though we spotted the Nokia 106 and Nokia 107 dual-SIM handsets on Nokia's India website.