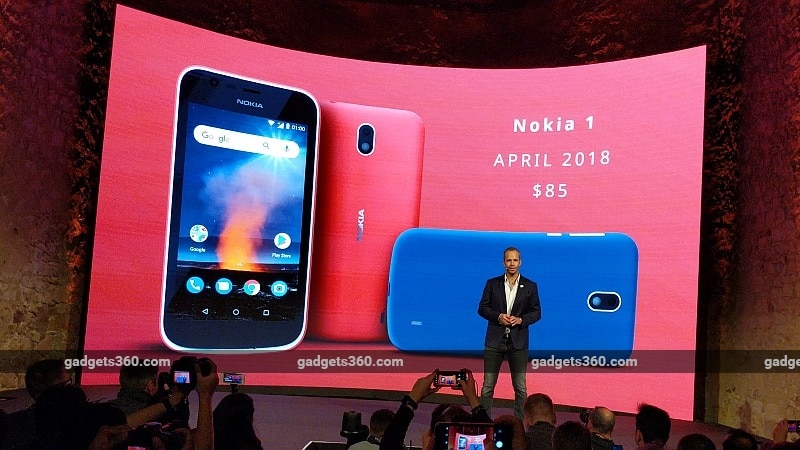 Nokia 1 was launched at the HMD Global press conference in Barcelona ahead of MWC 2018. It is amongst the first Android Oreo (Go edition) – aka Android Go – smartphones to have been launched, and we can expect to see more unveiled during the trade show this week. The Android Go ecosystem is meant to deliver an optimised experience despite budget hardware, and is complete with lightweight versions of Google apps and services, such as Gmail Go and Google Maps Go. Another highlight of the smartphone is the ability to use Xpress-on two-tone polycarbonate exchangeable covers, letting users personalise the look of their smartphones.  The Nokia 1 is the most affordable smartphone in the Nokia Android lineup, and sits below the Nokia 2 budget offering in the company’s stable.

The Nokia 1 price has been set at $85 (roughly Rs. 5,500), excluding taxes and subsidies, and HMD Global is calling this the global average retail price. There is no word on the Nokia 1 price in India yet. It will be available to buy from early April in Dark Blue and Warm Red colour variants. The launch markets haven’t been specified yet. Meanwhile, the Xpress-on covers priced at $7.99 (roughly Rs. 520) and available in Azure, Grey, Yellow and Pink.

Nokia 7 Plus Android One Smartphone With Dual Rear Cameras Announced

The Nokia 1 runs Android 8.1 Oreo (Go edition) – with the company boasting of its stock Android quality – and sports a 4.5-inch FWVGA (480x854 pixels) IPS display. It is is powered by a 1.1GHz quad-core MediaTek MT6737M SoC coupled with 1GB of LPDDR3 RAM. It bears a 5-megapixel rear camera with a fixed focus lens and an LED flash. On the front, it bears a 2-megapixel fixed focus camera.

At the Nokia Mobile event in Barcelona, HMD Global also launched the Nokia 7 Plus, Nokia 8 Sirocco, and Nokia 6 (2018) – all of which are Android One smartphones. A 4G VoLTE-enabled feature phone was also launched, the Nokia 8110 4G.