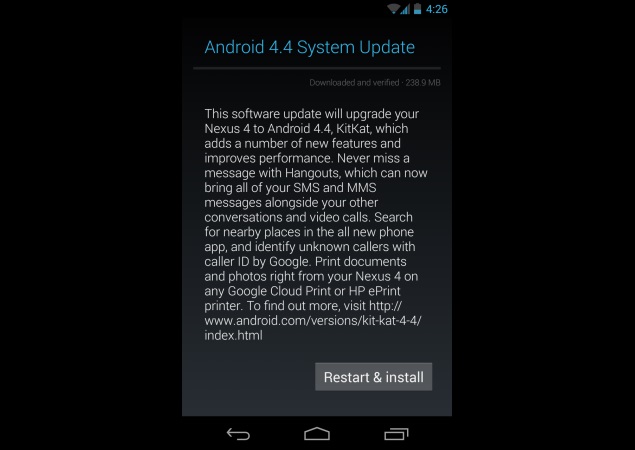 Google may not have announced the Android 4.4 KitKat update for the Nexus 4 but a Twitter user in India claims that his smartphone is now receiving the update via OTA (over-the-air).

Manan Chawla has posted an image that shows the 'Android 4.4 System Update' notification on his Nexus 4. Chawla's tweet reads, "This time it happened fast. Android 4.4 KitKat is on my #nexus4 #India."

As of now, there is no official word from the search engine giant on the Android 4.4 rollout for the Nexus 4. But the latest tweet suggests that Google might be rolling out the update in phases.

The Android 4.4 KitKat iteration brings some new features such as a new translucent menu bar, which is located at the bottom of the screen; new dialler and caller ID; unified Hangouts messaging app; smarter Google Now integration; step counter and detector, support for two new composite sensors, and support for screen recording.

Earlier this month, Google officially announced the rollout of Android 4.4 KitKat for its Nexus 7 and Nexus 10 tablets (Wi-Fi only models), available OTA. The search engine giant confirmed the news via Android's Twitter and Google Plus accounts.

However, Google did not specify an exact date for the update for mobile data model of Nexus 7 tablets. In addition, Google also left out of the update the Nexus 4 smartphone, saying it would be 'coming soon'.

Xbox One launched, New Zealander becomes first person to own one
Intel CEO says he will expand contract manufacturing business