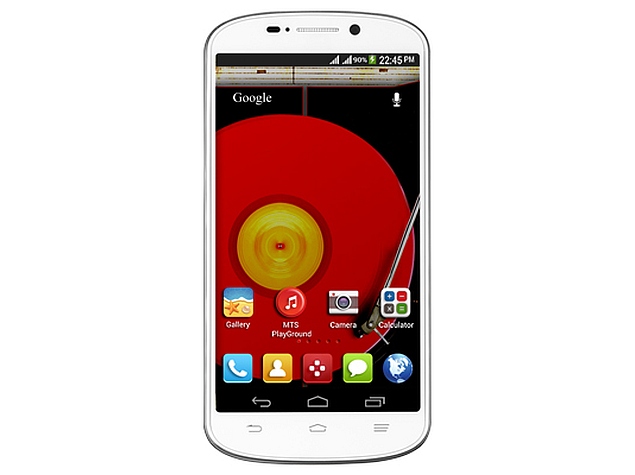 Telecom operator MTS has launched a new smartphone in India dubbed Blaze 5.0, coupled with an offer that gives 100,000MB (100GB) of Internet data for one year on a single recharge of Rs. 198. The firm plans to launch the smartphone in nine circles namely Delhi, Rajasthan, Gujarat, Karnataka, Kerala, Tamil Nadu, UP West, West Bengal & Kolkata with a price tag of Rs. 10,999 along with a MTS SIM card.

The MTS Blaze 5.0 smartphone comes with dual-SIM (CDMA+GSM) support and runs Android 4.1 Jelly Bean. The handset houses a 5-inch display and is powered by a quad-core Snapdragon S4 processor under the hood. The information on RAM and processor clock speed remains undisclosed.

The Blaze 5.0 also sports an 8-megapixel rear camera and a 0.3-megapixel VGA front-facing camera. The smartphone's inbuilt storage capacity has not been mentioned however, according to MTS, Blaze 5.0 can support up to 32GB of external storage via microSD card.

With a 2500mAh battery, the MTS Blaze 5.0 is rated to offer up to 9.5 hours of talk time. The handset boasts some exclusive apps made by MTS. While the MTS Playground music app lets users download and listen to songs, the MTS TV app lets them stream over 100 TV channels on the smartphone. MTS Wizard lets users activate their smartphone, pay bills and more.

In April, the dual-SIM MTS Blaze 4.5 smartphone was listed at an online retailer in India, priced at Rs. 9,999. Some of the key specifications of the handset are Android 4.1.2 Jelly Bean; 4.5-inch TFT touchscreen; 1.2GHz quad-core Qualcomm Snapdragon S4 processor; 1GB of RAM; 5-megapixel rear and a VGA resolution front-facing camera, and 4GB of inbuilt storage (expandable up to 32GB via microSD card).