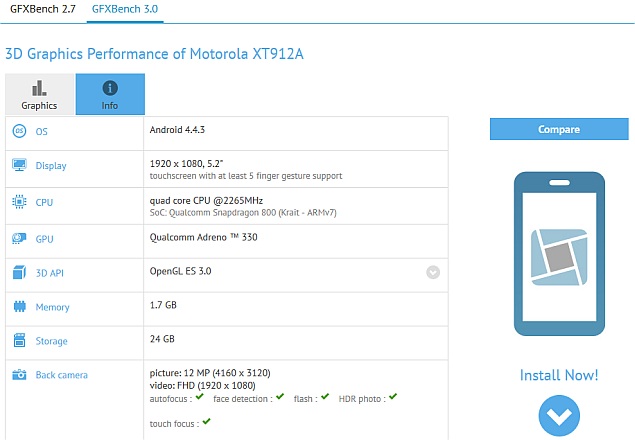 Motorola, after the success of its Moto X and Moto G smartphones, might be prepping to launch a new handset codenamed Motorola XT912A, as its specifications have surfaced online in a benchmark result listing.

The specifications of the yet-to-be-announced smartphone, which is said to the successor of the existing Moto X handset - the Moto X+1 smartphone that was leaked again earlier this month, come from the popular mobile benchmark GFXBench.

As per the benchmark results, the Motorola XT912A runs on a quad-core Snapdragon 800 chipset clocked at 2.265GHz, paired with 2GB of RAM and the Adreno 330 GPU. Other specifications listed include Android 4.4.3 KitKat, a 5.2-inch display with a full-HD resolution (that translates to around 424ppi), 32GB of inbuilt storage (24GB user available), a 12-megapixel rear autofocus camera, and OpenGL ES 3.0 support.

Unfortunately, no other specifications have been mentioned for the rumoured successor to the Moto X. However, its appearance in the benchmark tests hint that the smartphone might arrive quite soon.

Additionally, as noted by The Droid Guy, the codename XT912 is associated with the Motorola's Droid Razr made for Verizon in 2011, and the unannounced Motorola XT912A might be its next iteration.

Motorola might also be planning to launch another budget smartphone following the success of the Moto G, as the alleged specifications of the rumoured device leaked out last week. The report mentions the inclusion of Android 4.4 KitKat, a 4.3-inch display, a 1.2GHz dual-core processor paired with 1GB of RAM, 5-megapixel rear camera, 4GB of inbuilt storage and a 1900mAh battery capacity.

The rumoured new budget Motorola smartphone's expected wireless network options include 2G/3G, Bluetooth, FM radio and a feature dubbed as 'TV Digital', the function of which remains to be seen. The handset is also said to come in three variants: XT1021 (single SIM), XT1022 (dual-SIM) and XT1025 (dual-SIM with digital TV).