Motorola Razr 5G is expected to come with the Qualcomm Snapdragon 765 processor. 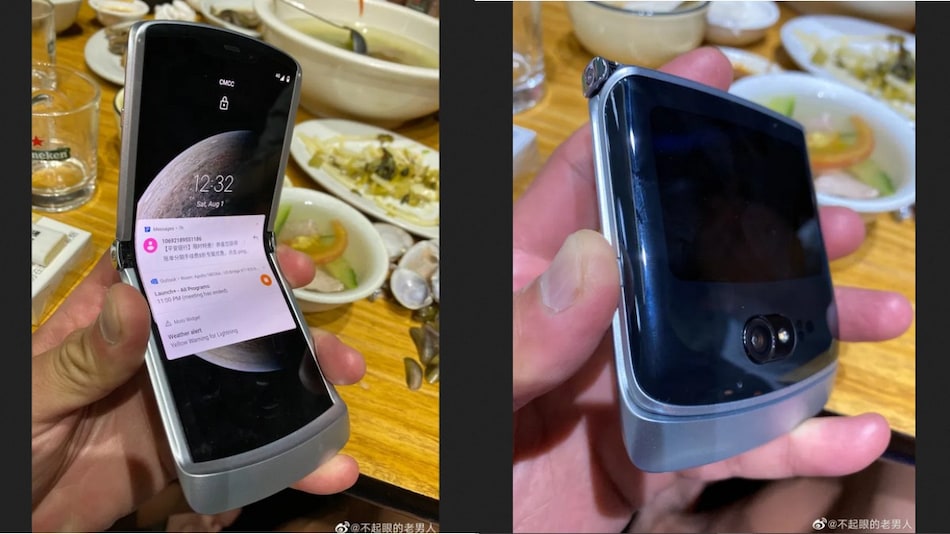 The Motorola Razr 5G may be launched early next year

Motorola Razr 5G images have reportedly been leaked, showing a redesigned chin as well as rounded edges. Other new tweaks seem to include a new camera module. The presence of a fingerprint sensor wasn't spotted on the images. This could mean that the company may have opted for an in-display sensor. The smartphone is expected to be the second-generation foldable phone from Motorola. It was earlier rumoured to be launched in September this year, but the launch may have been pushed to Q1 2021.

The alleged live images of the Motorola Razr 5G were first shared on Weibo; however, the original post has since been deleted. Sparrows News has republished by the images and these match with the previously leaked images by noted tipster Evan Blass who also managed to share some of the possible specifications of the phone. Both sets of images show a similar redesigned chin, silver chassis, and a notch-like design on the display. The camera module also seems to have a new look. Rumour mill suggests that the camera will be upgraded to a 48-megapixel sensor from the previous 16-megapixel sensor.

The smartphone will reportedly come with a dual camera setup. Also, the phone may include with a 20-megapixel front shooter, a jump from the 5-megapixel camera sensor in the first generation of the Motorola Razr (2019) foldable smartphone. The phone was earlier expected to be launched in September. However, a recent tip suggests that the device launch may have been delayed to the first quarter of next year.

The Motorola Razr 5G may feature a 6.2-inch flexible display and is expected to run on Android 10. The phone may have dual-SIM support (Nano + eSIM) with 5G capability. Under the hood, the phone is reported to be powered by the Qualcomm Snapdragon 765 processor, coupled with 8GB of RAM and 256GB of onboard storage. As mentioned, the phone may come with a 48-megapixel primary camera and 20-megapixel secondary shooter/ front camera. The phone could pack a 2,845mAh battery with 18W fast charging.