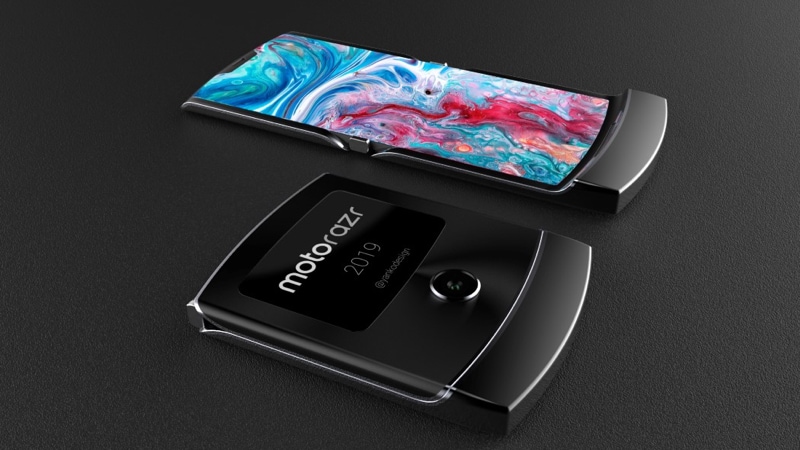 Motorola Razr 2019 renders are based on a design registration

The once iconic Motorola Razr is expected to make a comeback as a foldable smartphone. A report in the Wall Street Journal last month had sparked off rumours about Lenovo, Motorola's owner, trying to bring back the iconic mobile phone in a whole new avatar. The Motorola Razr 2019 may launch as soon as this month at a price point of around $1,500 (roughly Rs. 1,04,300), although there have been no formal announcements about a possible launch as yet. A set of 3D renders, based on previously revealed design registrations, have now made their way online, giving us a possible glimpse at the upcoming phone.

Later in January, a design registration was spotted on the World Intellectual Property Organization (WIPO) that showed what looked like a foldable smartphone from Motorola Mobility. The phone's design included the iconic Moto Razr hinge. The design also resembled a previously filed patent by Motorola in the United States.

Now it appears like someone has used the WIPO design filing to create 3D renders of the upcoming Motorola Razr 2019 phone. The renders were posted on a website called Yanko Design by designer Sarang Seth.

These designs give us a glimpse of how the Motorola Razr 2019 may actually look like, if the company does release it. The flexible folding display is expected to run all the way from the top to the bottom, possibly with an aspect ratio of 19:8. At the back, the renders reveal a secondary display and a single-lens camera on the upper half. The patent images lack volume buttons which have been left out of these renders for now.

If the Motorola Razr 2019 does see the light of the day, it might just cash in on all that nostalgia. The phone may initially release only in the US, according to a previous Wall Street Journal report. It will be the company's first foldable smartphone though, a trend that's catching up amongst major smartphone manufacturers.