Motorola One Fusion+ comes with a pop-up selfie camera setup situated on the top left – similar to what has been teased. 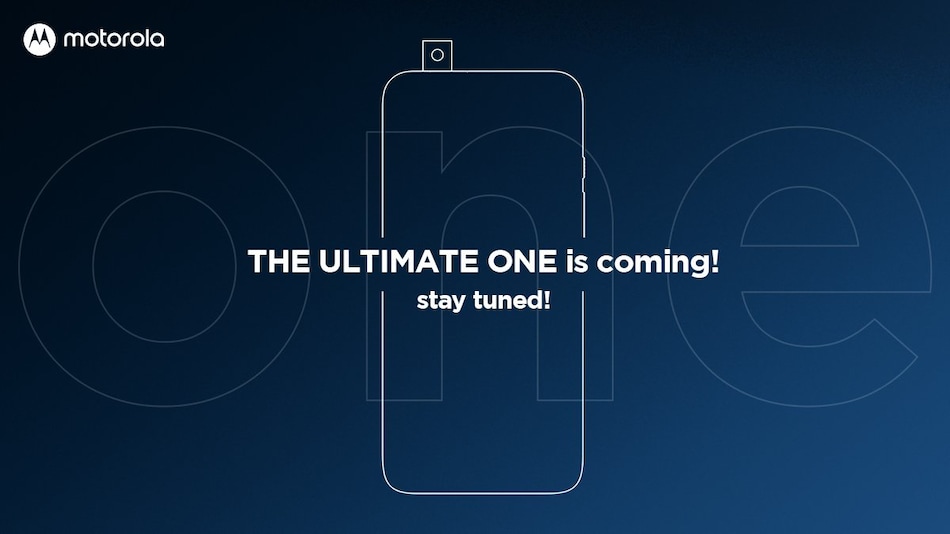 Motorola One Fusion+ was unveiled in Europe a few days ago

Motorola One Fusion+ is likely to launch in India soon. The Lenovo-owned company has started teasing the arrival of a new ‘One series' device in the country, and judging by the teasers, it is going to launch the Motorola One Fusion+. The phone was unveiled earlier this week in Europe, and the smartphone company isn't wasting much time to launch it in India. The device has a pop-up camera setup on the left end of the top spine, similar to what has been teased in the country.

Motorola India has released a couple of tweets hinting at the arrival of the new ‘One series' phone. The first tweet has the outline of a smartphone with a pop-up camera setup for the selfie sensor, and it is located at the left of phone's top edge. It reads, ‘the Ultimate One is coming'. The Motorola One Fusion+ also has a pop-up selfie camera setup in the same position, hinting that the phone may launch in India soon. There is another Motorola One device with a pop-up selfie camera – the Motorola One Hyper – but this phone has the module on the right edge of the top spine. The Motorola One Hyper was unveiled last December in the US, Latin America and some European markets. This model hasn't launched in India yet.

However, given the teaser, it is fair to decode that the Motorola One Fusion+ is launching first. The Motorola India Twitter handle has released another new teaser that doesn't reveal the name of the device, but hints at ‘ultimate shot, performance, power, and entertainment.' An exact launch date is not known yet, but Motorola should unveil more information soon.

The Motorola One Fusion+ is priced in Europe at EUR 299 (roughly Rs. 25,400) for the lone 6GB + 128GB storage option. It should launch in the same price range in India as well. The phone was launched in two colour options - Twilight Blue and Moonlight White.

Detailing the specifications, the Motorola One Fusion+ features a 6.5-inch full-HD+ (1,080x2,340 pixels) notch-less display. It is powered by the Snapdragon 730 SoC, paired with 6GB RAM. Internal storage is at 128GB, and the phone supports storage expansion using a hybrid microSD card solution (up to 1TB).

The quad rear cameras at the back of the Motorola One Fusion+ include a 64-megapixel main camera, an 8-megapixel ultra-wide angle camera, a 5megapixel macro lens, and a 2-megapixel depth sensor. Up front, the pop-up camera module houses a 16-megapixel selfie sensor.

There is a rear fingerprint sensor on the Motorola One Fusion+ and it comes with a dedicated Google Assistant button as well. The phone packs a 5,000mAh battery with 15W fast charging support. Connectivity options include Bluetooth v5, Wi-Fi 802.11 ac, GPS, 3.5mm audio jack, USB Type-C port, and dual 4G VoLTE.