Moto Z4 Spotted on Geekbench With Snapdragon 675 SoC, 4GB of RAM After Being Listed for Sale on Amazon

The upcoming phone is tipped to pack a single 48-megapixel rear camera. 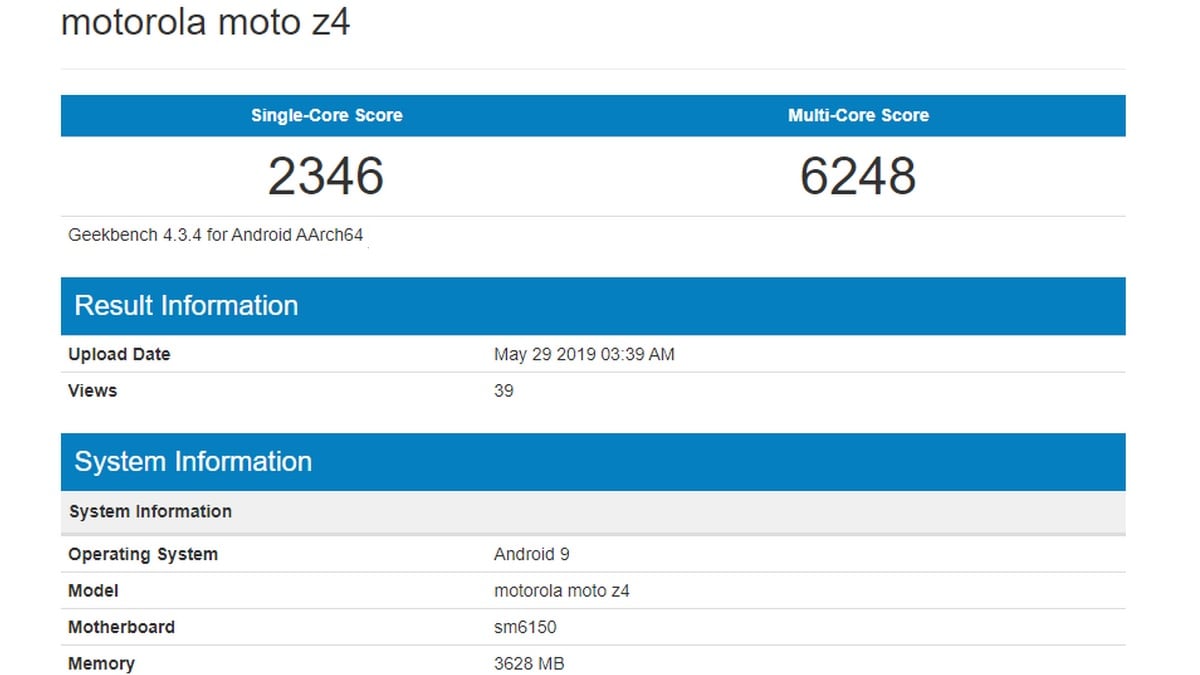 The Moto Z4 has been leaked multiple times in the past few weeks, and even went on sale a few days ago via Amazon before Motorola could officially announce it. Further adding to the Moto Z4's leak saga, the upcoming Motorola phone has now been spotted on Geekbench. The phone's Geekbench visit shed some light on its internal hardware such as an octa-core Qualcomm Snapdragon SoC clocked at 1.71GHz ticking at its heart, paired with 4GB of RAM. The Moto Z4 was spotted running Android Pie, which is not surprising for a phone set to go official in the upcoming months.

Talking about the Moto Z4's performance on the benchmarking platform, the phone put up a tally of 2,346 and 6,248 points on the Geekbench 4 single-core and multi-core tests. Other details revealed by the yet-to-be-announced Motorola phone's Geekbench visit include 4GB of RAM and an octa-core Qualcomm SoC with the codename sm6150, which is actually the part number of the Snapdragon 675 mobile processor. The Moto Z4's Geekbench listing was spotted by tipster Venkatesh Babu.G.

The benchmark scores are also in line with what we have come across on other Snapdragon 675-powered phones like the Samsung Galaxy A70 and the Redmi Note 7 Pro. Moreover, previous leaks have also indicated that the Moto Z4 will pack the Snapdragon 675 SoC that will be paired with up to 6GB of RAM and 128GB of inbuilt storage. The same details were also shared by an individual who managed to purchase the Moto Z4 after it went on sale via Amazon, despite not being officially launched.

As for the remaining specifications, the Moto Z4 is tipped to pack a 6.4-inch full-HD+ OLED display with a 19.5:9 aspect ratio, and it will also come with an in-display fingerprint sensor. The phone is rumoured to sport a 48-megapixel rear camera that will rely on pixel binning to take photos at 12-megapixel resolution, while the selfies will reportedly be handled by a 25-megapixel front camera. The Moto Z4 is rumoured to come equipped with a 3,600mAh battery, but there is no word on support for fast charging.