Motorola Razr Foldable Smartphone Design May Just Have Been Spotted 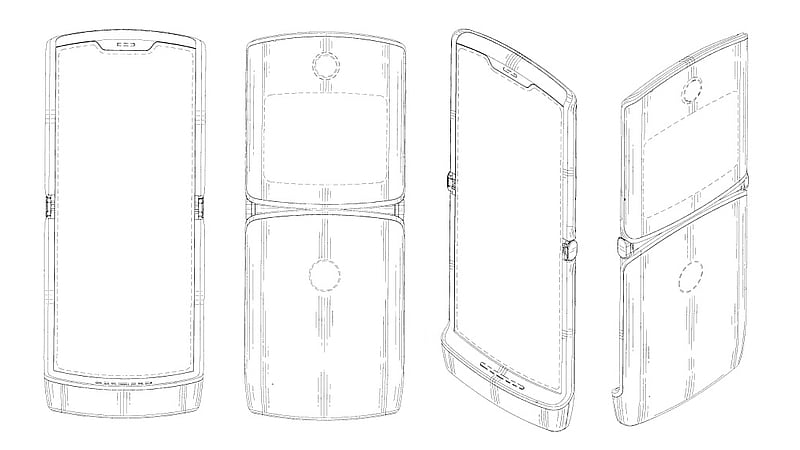 Motorola was in the news recently thanks to a report that it was planning on resurrecting the Moto Razr brand with the launch of a foldable smartphone. Now, a design registration has emerged on the World Intellectual Property Organisation (WIPO), showing a foldable smartphone design by Motorola Mobility, complete with the iconic hinge of the Moto Razr family. The design notably also appears similar to a patent filed by the company on the United States Patent and Trademark Office back in August.

Let's start with the more recent WIPO design registration, which was filed for by Motorola Mobility just last week, and granted by WIPO on Saturday. It clearly shows a smartphone with the iconic Motorola Razr hinge, as well as the iconic chin. It appears as the Lenovo-owned company will employ two displays - one large display on the inside of the clamshell form factor, and another on the outside, on the top half. This second display can be presumed to show some information to users without requiring them to unfold the smartphone, while the first display with larger real estate is where the regular work will take place. There is also a notch on the first display, containing the earpiece, while the back panel features two circular shapes on both the top and bottom, thought to be the front camera and rear camera respectively, though the possibility of a fingerprint sensor and Motorola logo can't be discounted.

To recall, the Wall Street Journal last week reported that Motorola was working on a foldable smartphone with a premium price tag, and that it would be part of the company's classic Razr family. The report claimed that Motorola was working with US carrier Verizon to launch the new foldable Razr smartphone in February, and that it would be priced at around $1,500 (roughly Rs. 1,04,300). To recall, the last clamshell phone with the Razr branding was the Motorola Razr V3, released in 2004. The phone is reported to have sold 130 million units globally. The WIPO listing was first reported by 91Mobiles.

Now let's step back to a USPTO patent filed by Motorola Mobility. Applied for back in May 2017, the patent was granted in August 2018, titled 'Electronic Device With Hinge and Corresponding Systems and Methods'.

As seen from the images (above), there are several differences in design between the WIPO filing and the USPTO filing, with the latter not appearing to feature a secondary display, and just a single camera on the top half of the rear panel. There is no iconic chin either. Of course, a patent is not meant to describe a finished product, just safeguard the underlying technology and concepts from potential misuse.