Moto G8 Power is tipped to debut at a February 23 event, alongside the Moto G8 and Moto G Stylus. 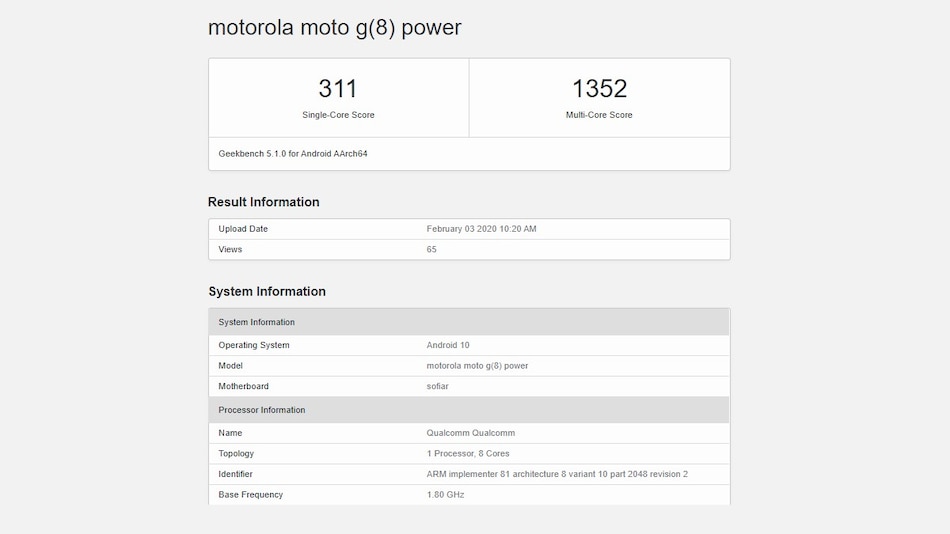 Motorola is heavily rumoured to launch the Moto G8 Power smartphone at its February 23 event later this month, alongside the vanilla Moto G8 and the Moto G Stylus. Prior to its official debut though, a Motorola phone said to be the Moto G8 Power has been spotted on Geekbench, shedding some light on its internals and software. The phone's Geekbench listing reveals an octa-core Qualcomm SoC at its heart and 4GB of RAM. The phone was caught running Android 10 on the software side.

The Geekbench listing, which was first spotted by GSMArena, clearly mentions the name 'Motorola Moto G8 Power'. The processing platform in question is an octa-core Qualcomm Snapdragon SoC clicked at 1.80GHz, which as per a previous leak, might turn out to be the Snapdragon 665 SoC. The Geekbench listing also reveals 4GB of RAM ticking alongside the Qualcomm SoC, but we expect more memory configurations of the phone to debut at the launch.

On the software side, the Moto G8 Power was spotted running Android 10. And if past Moto series smartphones are any indication, the Moto G8 Power will most likely offer a stock Android interface with a few in-house features such as Moto Actions thrown into the mix. As for the benchmarking performance, the Moto G8 Power scored 311 on the Geekbench v5.1 test, and put up a tally of 1,352 in the multi-core test.

The Moto G8 Power is said to pack a 6.36-inch full-HD+ (1080x2300 pixels) display with 19:9 aspect ratio. The Moto G8 Power will reportedly come equipped with a quad rear camera setup that is highlighted by a 16-megapixel primary snapper with an f/1.7 aperture. It will be assisted by an 8-megapixel wide-angle lens with a 118-degree field of view and a 2-megapixel macro shooter with an f/2.4 lens. The fourth camera employs an 8-megapixel sensor with an f/2.4 lens. Selfies will be handled by a 25-megapixel snapper with an f/2.0 aperture. It is also tipped to pack a 5,000mAh battery and will offer dual-band Wi-Fi support.